Direct-to-consumer (DTC) outlets, such as farmers’ markets and roadside stands, have grown in number over the past few decades. According to USDA’s Agricultural Marketing Service, 8,687 farmers’ markets operated in 2017, up from 2,746 in 1998. This expansion reflects primarily consumer interest in fresh, locally grown foods, especially fruits and vegetables. Consumers buying directly from farmers at markets, stands, and other types of DTC outlets may see a greater variety of produce items, interact with growers, and be exposed to nutrition information, cooking instructions, and recipe ideas. This interaction and exposure can further increase consumer demand for fruits and vegetables.

Households that patronize DTC outlets may already have a greater demand for fruits and vegetables, owing in part to a heightened interest in and knowledge of nutrition. For this reason, ERS researchers used a statistical model to control for other factors that might affect fruit and vegetable demand, such as income, demographics, and attitudes toward food, shopping, and nutrition. Of key interest to the researchers was how a household’s fruit and vegetable spending varied with its inclination to buy these foods at DTC outlets. They found that the average weekly fruit and vegetable spending of $12.60 increased by 60 cents—about 5 percent—if a household’s likelihood to visit a DTC outlet in a given week increased by 2 percentage points.

Increases in fruit and vegetable spending among DTC patrons may reflect a variety of shopping behaviors, such as purchasing more expensive types of produce. For example, a household may choose grapes instead of bananas, or leafy lettuce instead of iceberg. Additional research is needed to confirm and better understand the health implications of any such changes in demand. 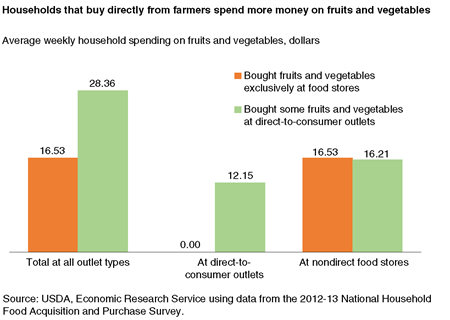 The Relationship Between Patronizing Direct-to-Consumer Outlets and a Household’s Demand for Fruits and Vegetables, by Hayden Stewart and Diansheng Dong, ERS, January 2018