Difficulty accessing large grocery stores may increase reliance on smaller stores and restaurants, possibly resulting in a poor diet and diet-related health problems. ERS researchers used data captured in USDA’s National Household Food Acquisition and Purchase Survey (FoodAPS) to examine if differences in how far low-income households live from large grocery stores and whether they own a car influences their food spending behaviors. The researchers found that low-income households with more difficult access spent a similar share of their food budgets at large food stores but a greater share at convenience, dollar, and drugstores compared with households with easier access.

The researchers found that low-income access-burdened and sufficient-access households spent similar shares of their weekly food spending at grocery stores. Both groups spent 57-58 percent of their weekly food expenditures (an average of $27.54 per person) at large grocery stores—supermarkets, superstores, and club stores—and 3 to 5 percent at small grocery, ethnic, and specialty food stores.

Differences between the two low-income access groups did arise in spending at eating places and at convenience, dollar, drug, and other small stores. Access-burdened households spent 11 percent of their food expenditures at these stores ($3.22 per person per week) compared with the 5-percent share for sufficient-access households ($1.93 per person per week).

If a household lives farther from grocery stores and does not have a car to travel to such stores, the household may fill the grocery gap with purchases at nearby eating places. However, this was not the case for low-income households. The ERS study found that low-income access-burdened households spent a smaller percentage of their food budget at eating places than low-income sufficient-access households. 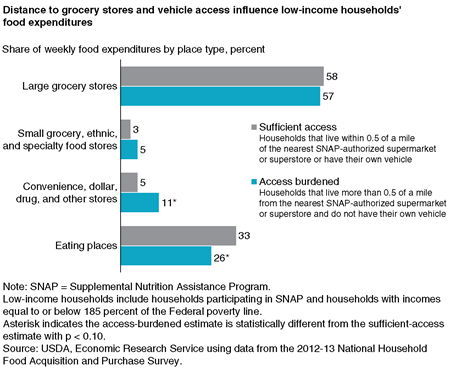