Child Poverty Heavily Concentrated in Rural Mississippi, Even More So Than Before the Great Recession

The share of children living in poverty in the U.S. remains higher than it was before the Great Recession. According to estimates from the U.S. Census Bureau’s American Community Survey (ACS), nearly 20 percent of children were living in poverty in 2016, compared with 18 percent in 2007. Also, the number of children in poverty increased over this period by 1 million, from 13,097,100 to 14,115,713. Child poverty rates continue to be highest in the South and Southwest, particularly in counties with concentrations of Native Americans and along the Mississippi Delta. Children in poverty tend to live in rural (nonmetro) counties—many with persistently high poverty—that were hard hit by the recession.

In 2016, 23.5 percent of rural children were poor, compared with 20.5 of urban (metro) children. Rural child poverty remained higher than pre-recession rates nearly a decade after the Great Recession (2007-09). That was also true of child poverty in urban areas and within all regions of the Nation. 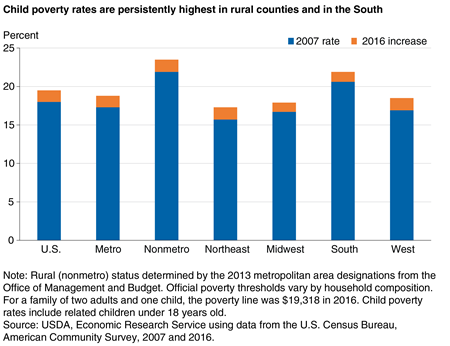 Research has linked poverty to low levels of well-being in childhood and adulthood, including health, economic, and behavioral problems. These problems can often drive increases in individual and family poverty over time. Child poverty is more sensitive to labor market conditions than is overall poverty. Scarcity of jobs, physical isolation, and lack of employment and transportation services often pose earnings challenges for rural parents, putting their children at risk of being poor. That risk is greatest among single-parent families, particularly those headed by a female. Research shows that among family types, single parents are less likely to have an education beyond high school and are more likely to be without employment or to work in a job that is not secure or does not pay a living wage. 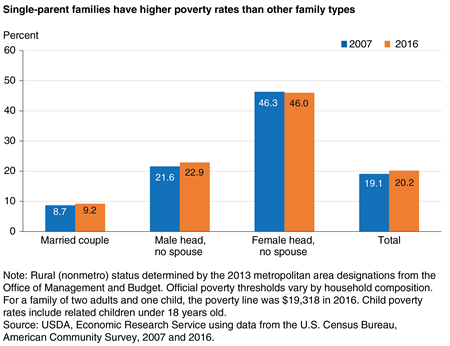 The number of children living in poor areas, regardless of their family economic standing, has risen over time. The share of all rural children residing in high child poverty counties (child poverty rate of 20 percent or more) was nearly 2 percentage points greater in 2016 than in 2007. That increase was almost entirely among nonpoor children. In total, about three of five nonpoor rural children and four of five poor rural children lived in high child poverty counties in 2016. Research has shown that growing up in poor areas increases the likelihood that children may experience the consequences of poverty, such as lack of access to healthy food, healthcare, quality education, and adequate housing.  Furthermore, that exposure to areas with concentrations of extreme and persistent poverty increases their risk of negative outcomes.

Rural child poverty concentrated and persistent in the South 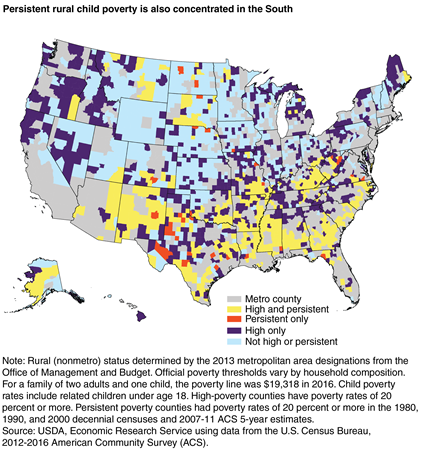 Understanding the Rise in Rural Child Poverty, 2003-14 , by Thomas Hertz and Tracey Farrigan, ERS, May 2016