Store-level scanner data for 2012 from IRI’s InfoScan were used to calculate a census tract-level price index that takes into account the lack of availability of some foods in some locations. This variety-adjusted price index captures price differences for the foods available in both low- and high-access areas, and it adjusts for differences in the variety of foods stocked in stores in the two access areas. For example, if commonly consumed food items such as apples or broccoli are not available in the area, then the variety-adjusted price index of the area will be higher than other areas. The degree to which the index is higher depends on whether substitute products, such as oranges or cauliflower, are available and the popularity of the missing food items, as measured by national sales.

The researchers found that variety-adjusted food prices were 3.5 percent higher in low-access urban census tracts than in otherwise similar tracts with high access, mostly due to lower variety of foods in low-access tracts. Prices for food products commonly available in both types of tracts were found to be less than 1 percent higher in low-access tracts than in high-access tracts. The difference in variety-adjusted prices is estimated based on stores’ sales data in the census tract of interest and in contiguous tracts. Contiguous tracts are included because some households may be closer to stores in neighboring tracts than in their own tracts and may cross tract boundaries to shop for food.

If households are constrained to shop within their own census tract because of a lack of transportation, then households in low-access urban tracts face variety-adjusted food prices that are 9.2 percent higher than those in high-access urban tracts. Similar to the scenario in which consumers are not constrained to shop within their own tract, the price difference is mostly driven by less variety of foods available in these low-access tracts. 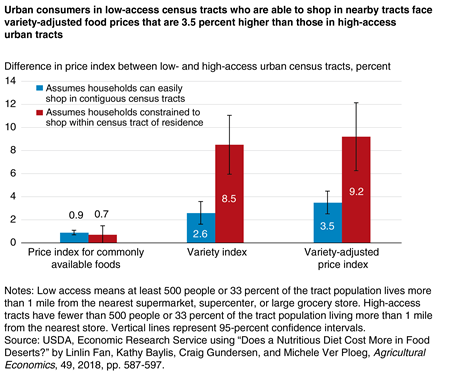