Shifts in temporary (10-15 year) land retirement through the CRP also contributed to the decline in overall conservation spending. CRP spending was steady for FY2014 to FY2017 but was lower than at any time since FY1996. CRP acreage peaked in 2007 at 36.4 million acres but declined to 23.4 million acres at the end of FY2017. The effect of lower acreage on overall program cost was partially offset by an increase in the average payment per enrolled acre, from $57 at the end of FY2007 to $77 at the end of FY2017. The increased cost per acre reflects the increasing proportion of enrollment through continuous signup, which tends to enroll practices that require small acreages but yield large environmental benefits per enrolled acre—such as field-edge filter strips, riparian buffers, and grass waterways. 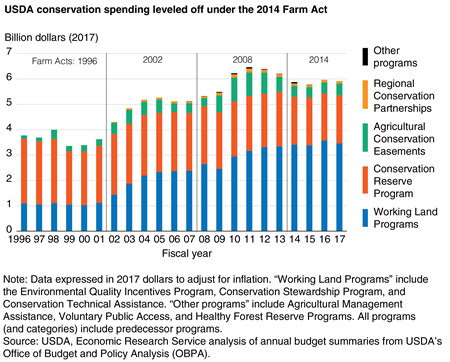