The year 2017 marked the fourth consecutive fiscal year that participation in USDA’s largest food and nutrition assistance program, the Supplemental Nutrition Assistance Program (SNAP), decreased. On average, 42.2 million people—or about 13 percent of the Nation’s population—participated in the program each month in fiscal 2017. This was almost 5 percent fewer than in the previous fiscal year and 11 percent fewer than the historical high average of 47.6 million per month in fiscal 2013.

Unlike other food and nutrition assistance programs that target specific groups, such as school children or pregnant women, SNAP is available to most needy households with limited incomes and assets (subject to certain work and immigration status requirements). In fiscal 2017, the program provided participants with an average of about $126 of benefits per month to purchase food items at authorized retail foodstores. SNAP benefits can be redeemed for most types of food but cannot be used to purchase alcohol, tobacco, hot foods, or foods intended to be eaten in the store.

Fiscal 2017’s decrease in the number of participants in large part reflects the continued improvement in economic conditions in recent years. Because eligibility for SNAP is based largely on a person’s financial situation, program participation is countercyclical—expanding during economic downturns when people lose their jobs and see their incomes fall and contracting during periods of economic growth when unemployment falls and people’s incomes rise. In 2017, the unemployment rate was 4.4 percent, below the 7.4 rate in 2013. Similarly, the share of Americans with incomes below the poverty line fell—from 14.8 percent in 2013 to 12.7 percent in 2016.

Prior to fiscal 2014, participation in SNAP increased in 12 of the previous 13 years. From fiscal 2007 to fiscal 2013—a period that included the Great Recession—the rise in the SNAP caseload was especially large, 81 percent. Expenditures for SNAP increased even faster than caseloads during this period that included a temporary increase in benefits for all SNAP households, which was part of the American Recovery and Reinvestment Act of 2009. Reflecting the continuing participation decrease in recent years, Federal spending for SNAP fell 4 percent to $68.0 billion in fiscal 2017—15 percent less than the historical high of $79.9 billion set in fiscal 2013. Federal spending for SNAP accounted for 69 percent of all Federal food and nutrition assistance spending in fiscal 2017. 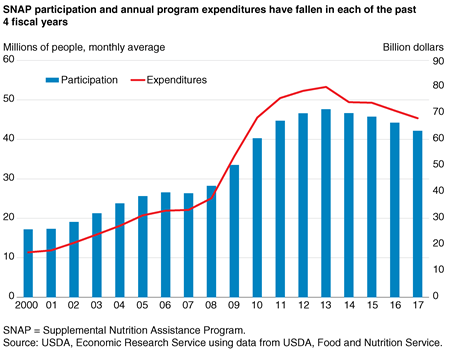