People with disabilities experience higher levels of poverty and material hardship than others and are also at increased risk for food insecurity—at times having difficulty meeting basic food needs due to lack of resources. Of the U.S. population, over 13 percent has some form of disability. Across the adult lifespan and across income levels, adults with disabilities are more likely to be in food-insecure households than adults without disabilities.

The research found that adults with disabilities—mental health disabilities in particular—are at an increased risk of living in a household that is food insecure. Working-age adults have higher odds of food insecurity than young adults. Older adults have lower odds of food insecurity than young and working-age adults. Some of these differences may be explained by the different levels of access such populations have to government programs such as employment services, Supplemental Security Income, and Social Security.

After accounting for economic and demographic characteristics, such as household income and employment status, the analysis showed that adults with a mental health disability were three to five times more likely to live in a food-insecure household, depending on age, than demographically similar adults without a disability. Mental health disabilities were the only type of disability that resulted in a significantly higher likelihood of food insecurity for all age groups considered. 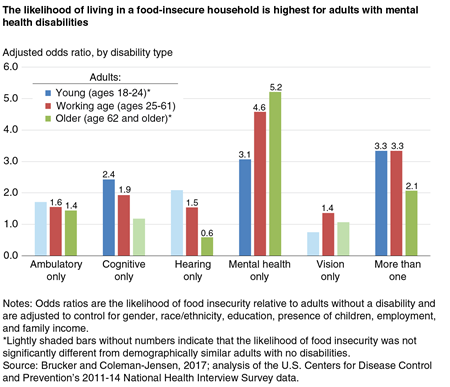 “Food insecurity among young adults with intellectual and developmental disabilities in the United States: Evidence from the National Health Interview Survey,” by Debra L. Brucker and Derek Nord, American Journal on Intellectual and Developmental Disabilities, 121, 6, 520-532, January 2016