Farming requires a substantial investment in assets such as barns, machinery, and equipment. In 2012, survey data reveal farms had an average of $106,000 in “depreciable” assets that have a useful life of more than 1 year—with large farms averaging nearly $1 million. Replacing and expanding this stock requires additional investment: in 2012, about two-fifths of U.S. farms purchased such assets. About a third of small farms (less than $350,000 of gross cash farm income, or GCFI, before expenses) reported that these asset purchases averaged about $8,600, while 83 percent of large farms (GCFI of $1 million or more) reported an average of nearly $202,000 in that year.

Two provisions of the U.S. Internal Revenue Service’s Internal Revenue Code, section 179 and bonus depreciation, allow farms (and all businesses) to deduct the cost of these assets in the year that they are placed in service—rather than depreciating (spreading out) the deductions over the useful life of the assets (the cost of land is not considered, because it is not a depreciable asset). These deductions can be used together to accelerate the recovery of the asset’s cost, thereby reducing a farmer’s taxable income, sooner than otherwise. All else equal, the sooner the cost is recovered, the lower is the farm’s cost of capital. ERS research analyzed whether these options to deduct asset costs sooner led to changes in farm asset investments.

The impact of the tax provisions on asset purchases could differ, depending on the details of the tax provisions. The maximum amount a farmer can immediately deduct annually under section 179 has increased over time, from less than $25,000 annually in 2000 to $510,000 in 2017. Any unused portion of the section 179 deduction may be carried over to the next year. However, the deduction decreases when investments in a given year exceed a specified amount, $2.03 million in 2017.

On the other hand, bonus depreciation is calculated after the section 179 deduction, applies to new equipment only, and has no limit based on the value of the investment. Introduced in 2001, bonus depreciation—also known as section 168(k) of the Internal Revenue Code—allowed farmers to deduct an additional 30 percent of the remaining asset cost in the first year. Beginning in 2012, that allowance was raised to 50 percent.

ERS researchers developed a model to demonstrate how changes in these tax policy provisions impacted farm-level asset investment between 1996 and 2012. Controlling for characteristics of the individual farmer and farm business—such as age, education, tenure, farm size, and efficiency—results show that the increased section 179 deduction amount had a statistically significant impact on farm asset investment overall. For every $1,000 increase in the section 179 amount, the research found that farms made an incremental asset investment between $320 and $1,110. 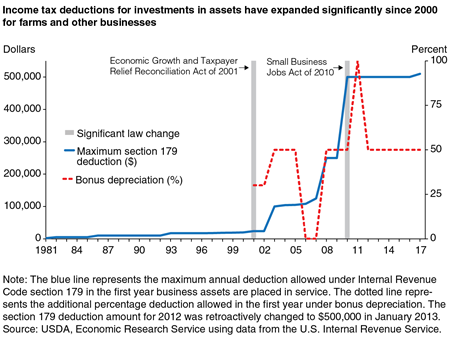