Alfalfa is a highly nutritious, perennial legume that contains high concentrations of vitamins B, C, D, and E. Most of the alfalfa grown in the United States is used as feed, particularly for dairy cattle. In 2013, approximately 18 million acres of alfalfa—with a production value of $10.7 billion—were harvested in the United States. Alfalfa is the fourth largest U.S. crop in terms of acreage and production value, behind only corn, soybeans, and wheat.

Historically, U.S. growers have used herbicidal active ingredients such as 2,4-DB and paraquat for weed control in alfalfa. Increasingly, however, they rely on glyphosate, the active ingredient in the popular herbicide products Glyphomax, Roundup, and Touchdown. This shift in usage is due to the development of genetically modified, herbicide tolerant (HT) seeds.  Glyphosate applications then kill weeds but leave the HT alfalfa growing.

USDA first deregulated HT alfalfa in 2005. But, in 2007, a U.S. District Court imposed a moratorium on new HT alfalfa seed sales while environmental impacts were further studied. Adoption of HT alfalfa resumed once the moratorium was suspended in 2010.

In part, because alfalfa tends to be seeded (on average) once every 7 years, HT alfalfa adoption rates have increased relatively slowly compared to other field crops, such as corn and soybeans, which are not perennials. In 2013, about 810,000 acres were planted with HT alfalfa—approximately a third of newly seeded acres that year.

In 2014, USDA deregulated a new genetically modified HT alfalfa variety, which is more easily digested by cattle. The commercialization of this trait is likely to further boost HT alfalfa adoption rates. 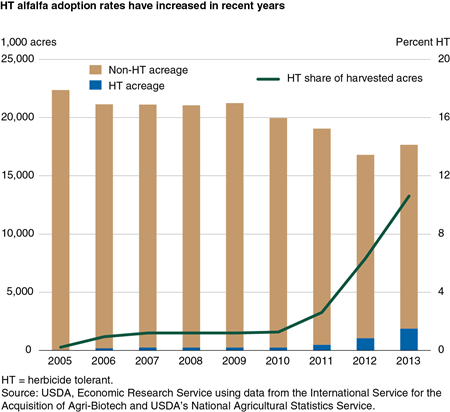