The outbreak also motivated retail and foodservice buyers to increase their demands for food safety to reduce their own risk of being associated with a contaminated product.  In addition, this outbreak led some in the produce industry to advocate, for the first time, for Federal regulation of food safety.  In 2011, the Food Safety Modernization Act (FSMA) was signed into law.

A recent ERS report examines the 2012 food safety practices and costs of seven large LGMA participants. Since the program began, firms have had time to adopt the program and adapt with new strategies to minimize the cost of these food safety practices while maintaining the LGMA requirements to reduce risk. These firms adopted food safety practices beyond those required by LGMA for their own risk-management strategies, ease of operation, and in response to buyer requests. Demands from retail, foodservice, and bagged-salad processors have been important drivers of food safety standards in the produce industry. Over time, the LGMA and other practices demanded by buyers have become the food safety culture of the leafy greens industry and is considered just a cost of doing business. This culture has also spread to other commodities. Many large produce growers across the country have voluntarily adopted similar food safety programs as a necessary component of their own risk-management needs and to have access to buyers that demand this kind of food safety program.

This case study focuses on grower/shippers (vertically integrated firms that grow and market) whose own production dominates sales (instead of also selling large quantities of leafy greens for other growers) and that do most of their own harvesting. The seven firms are very large with an average of $196.6 million in fresh produce sales in 2012. They grew a wide range of leafy greens, other vegetables, and some fruit, with leafy greens averaging 52 percent of their total produce sales. Most grew some leafy greens for bagged salad processors. Some firms grew both organic and conventional leafy greens, but none grew only organic leafy greens.

This case study looks at total food safety costs for firms in the LGMA, not just the costs of LGMA practices. Food safety costs are difficult to measure because they permeate nearly every aspect of a produce operation and are not usually maintained separately in company accounting systems. Some costs are relatively straightforward to measure, such as the cost of dedicated food safety staff. Other costs are more challenging to measure; for example, one person may monitor a field for food quality (for example, size, shape, and color) and animal intrusion for food safety at the same time, making it difficult to attribute time to the different activities.

For six of the seven firms in the study, field-level costs could be measured separately for five practices. Some firms provided costs for just leafy greens production while others provided costs for all produce production. Analysis is based on cost shares per operation (cost of each of the five food safety practices divided by the total cost for the five practices). This depends on assuming that the cost shares for leafy greens are the same as for all produce on the operation. Cost shares provide insight into what practices are relatively more expensive than others, which is useful for considering the costs that growers will face when adopting new food safety standards.

Anyone who comes into direct contact with the leafy greens could potentially introduce contamination, so a culture of food safety is needed that includes every worker. Food safety is incorporated into the job descriptions of all employees, but a small group of people do most of the food safety work. For example, LGMA requires that at least one person in each firm have responsibility for food safety. These large firms all had more than one, with an average food safety staff (which included recordkeepers) of 5.2 full-time equivalent employees. After the outbreak in 2006 and adoption of the LGMA, firms increased food safety staff, but the numbers declined as people became more experienced in implementing the program and more responsibilities were shifted to harvest foremen (although LGMA does not specify a role for them).

Harvest is a particularly critical period for potential contamination, with an increase in staff, workers, tools, and equipment in the fields. The harvest foremen spent an average of 22 percent of their total work time on microbial food safety issues. They spent a third of this food safety time monitoring and documenting the food safety plan at the field level. The foremen have a range of responsibilities relating to harvest workers, including ensuring that they are not ill, that harvest knives are sanitized, that toilet/handwashing facilities comply with the food safety plan, etc. Almost another third of foremen food safety time is devoted to walking the field on the day of harvest looking for any problems—tracks of animals, feces in the field, etc. 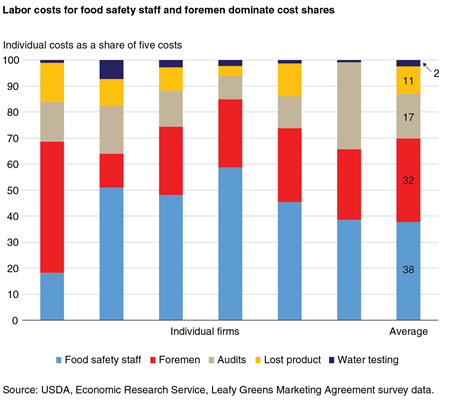 After the 2006 foodborne illness outbreak linked to spinach, many firms reported “audit fatigue” when buyers demanded different audit standards. However, the number of audit standards required by buyers may have declined since then, according to some reports. International efforts to establish the equivalency between some audits has allowed one audit to potentially satisfy many buyers. In addition to the LGMA audit, firms may comply with commercial third-party audits, addendum audits, and buyer audits. All firms had the required LGMA audits which only covered leafy greens and at least one other commercial food-safety standard that covered all commodities grown. When buyers want more practices than a commercial audit covers, an audit company may develop an addendum. The auditor fills in the common information on both audit forms and then asks the buyers unique questions for an additional fee. Five of the seven firms had at least one addendum. Some buyers require buyer-conducted audits with their own standards and four firms had these. In 2012, the number of different types of audit standards for field activities among the survey firms averaged 4.6.  Audit costs for field activities averaged 17 percent of the food safety costs—11 percent for LGMA audits and 6 percent for other audits. 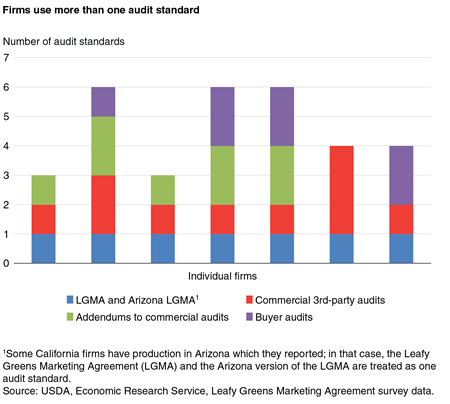 Practices Incorporated to Reduce the Potential Risk of Animal Intrusion

LGMA requires buffer zones between leafy greens and adjacent risk factors, such as grazing animals and concentrated animal feeding operations. Some buyers had demanded much wider buffers after the 2006 outbreak than LGMA requires. It was reported that, in general, these buyer demands have declined over time. In 2012, only half of the firms reported having buffers, and none of them was larger than the LGMA requirements. The remaining firms did not have buffers because they were not adjacent to risk factors, had roads all around their ranches, or were far away from waterways that could attract animals. Over time, firms found ways to minimize taking leafy greens land out of production for buffer zones, including renting land from adjacent livestock operations to form a buffer. With experience, growers know which fields are particularly vulnerable to environmental risk factors and can sometimes plant alternative crops in those fields. Excluding the opportunity cost of land set aside for the buffer zone (which varies, depending on location), other costs for creating or maintaining a buffer seem quite low.

LGMA also requires field monitoring and not harvesting produce from areas with evidence of animal intrusion and potential for microbial contamination. All but one firm lost product due to animal intrusion in 2012. The pre-harvest value of lost product accounted for 11 percent of the food safety costs. Costs would vary from year to year, based on animal pressure.

LGMA set a standard for acceptable water used in production and post-harvest operations in the fields with respect to generic E. coli. The program requires monthly water testing for all water unless a firm qualifies for an exemption, based on water source and acceptable test results. If a grower uses municipal or well water and the water tests are acceptable for five consecutive samples, the firm is eligible for the exemption, which reduces the frequency of testing but does not eliminate testing requirements. All of the firms in the case study qualified for the exemption but some continued monthly testing for some or all of their fields. Some firms think it is better to test every month and avoid the possibility of missing a critical test result. Many firms sell some of their production to buyers, such as bagged salad processors, who often require monthly testing. Water testing represented 2 percent of the five food safety costs that were measured.

Insight for Adoption of the Food Safety Modernization Act

The California LGMA experience provides insight into the type of practices and costs that U.S. produce growers may face as they come into compliance with FSMA. The Act establishes a national approach to regulating food safety for fresh produce, shifting the policy focus from reaction to food safety incidents to risk-based preventative action. While the law includes many provisions, the “Standards for Growing, Harvesting, Packing, and Holding of Produce for Human Consumption,” commonly known as the Produce Rule (PR), establishes, for the first time, the regulation of on-farm food safety practices by the U.S. Food and Drug Administration (FDA). FDA published the final PR in early 2016, and the first group of growers must comply by 2018. The PR includes field-level requirements similar to the LGMA food safety program and also covers post-harvest food safety requirements beyond the field (see box, Food Safety Modernization Act). FSMA generally requires fewer practices than LGMA at the field level, so FSMA costs are likely to be lower than LGMA costs. Firms may, however, exceed the minimum PR requirements for their own risk-management needs, ease of operation, and buyers’ demands. The comparison of field-level LGMA costs and total PR costs is uncertain

Food safety costs also depend on characteristics of the industry. The firms in the case study are large firms selling nationally and internationally, and operating under a demanding food safety program. Leafy greens are mostly hand harvested on a daily basis over a long season, and heads of lettuce are packed and palletized for shipping in the field. This industry will have more field costs related to harvest foremen, food-safety training, toilet/handwashing facilities, and glove use than operations with mechanical harvesting. Market channels also affect food safety costs. Many LGMA members are selling to bagged salad processors, who are very demanding in regard to food safety. For commodities where fresh-cut products (like bagged salads) are not an important market channel, firms may face fewer demands for additional food safety practices.

The LGMA and the FMSA’s Produce Rule (PR) address the same produce food-safety risk factors, and many of the requirements are similar, although the LGMA is generally more specific about what must be done. Risk categories covered by both food safety programs are: personnel qualifications and training; health and hygiene; agricultural water; biological soil amendments of animal origin and human waste; domesticated and wild animals; growing, harvesting, packing, and holding activities; and equipment, tools, buildings, and sanitation.