A food-secure household is defined as one with access to sufficient food for all its members to lead active, healthy lives. A food-insecure household, on the other hand, does not have the resources to acquire enough food for some or all of its members. Food-insecure households may skip meals, cut the size of meals, or compromise the nutritional quality of meals due to cost. During 2000-07, U.S. food insecurity rates ranged between 10 and 12 percent. After the Nation’s financial crisis hit in late 2007, 15 percent of U.S. households were food insecure. The U.S. food insecurity rate remained between 14 and 15 percent, before falling to 12.7 percent in 2015.

Food insecurity raises concerns because it can have lasting health consequences for members of affected households. Research has found that food-insecure adults are more likely to suffer diabetes, obesity, and depression. Children living in food-insecure homes face higher risks of iron deficiency anemia; more frequent stomach aches, headaches, and cold; and are more prone to developmental and academic problems.

A recent ERS study explored the relationship between energy price shocks and food security, as well as two other measures of food hardship or distress, and found that price shocks in each energy source in the analysis—gasoline, natural gas, and electricity—caused an increase in the probability of a household becoming food insecure and/or experiencing two other food-distress indicators. The magnitude of the response was higher for low-income households compared to the average response for all households.

The ERS study looked at the effects of energy price shocks on three measures of food distress using December 2001-14 data from the Food Security Supplement of the U.S. Census Bureau’s Current Population Survey (CPS). The three measures of food distress examined were based on responses to CPS questions related to food purchasing or consumption obstacles:

Price shocks for each of the three energy sources were derived from State-level data from the U.S. Energy Information Administration over the time period 2000 through 2014. Shocks are defined as significant increases from what the households expected to pay given the information they had available at the time.

The study analyzed three overlapping samples from the survey: all households, households at or under 185 percent of the Federal poverty line (low-income households), and low-income households that reside in cold States—defined as the 26 States (among the 48 contiguous States) with the coldest average temperatures in December for 2000-14. 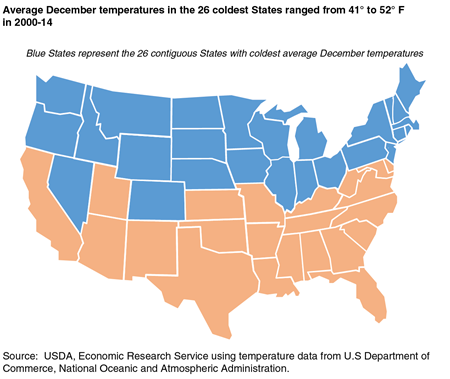 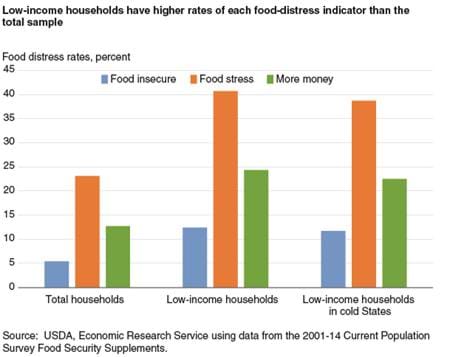 The ERS analysis considered three energy sources: gasoline, natural gas, and electricity. Unexpected price increases for each energy source affected at least one food-distress indicator for each sample of households. Natural gas price shocks had the most consistent effects on all households and low-income households, increasing the likelihood of each indicator for all households and low-income households. Gasoline price shocks, however, had a less consistent effect, increasing the likelihood of needing more money for food in each sample but not increasing the other measures of food distress. 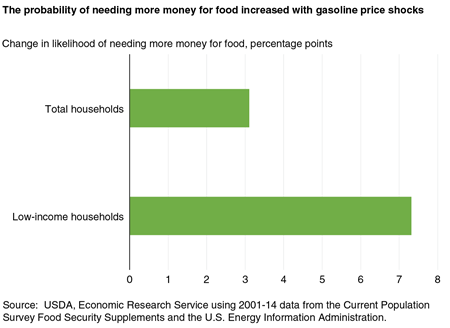 Natural gas is the primary energy source for heating homes in the Northeast, Midwest, and West. Natural gas can also be used for powering water heaters and for cooking in homes. Natural gas price shocks over the years 2000-14 increased the probability of each food-distress indicator for the total sample and low-income sample. The magnitude of the effect was greater in the low-income sample, likely reflecting low-income households’ more constrained budgets. 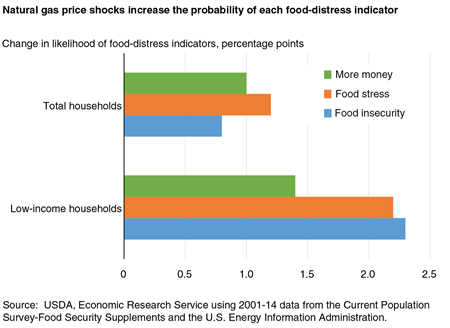 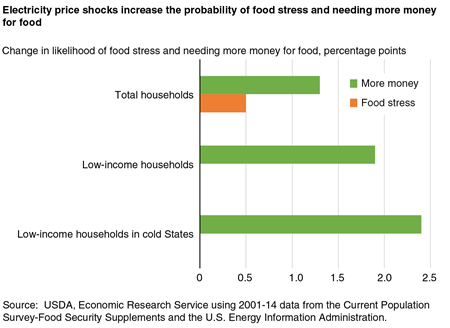 Other Assistance Programs May Lessen the Effects of Energy Price Shocks

When energy prices rise unexpectedly, low-income households face difficult budget decisions. Poor households often lack the savings, assets, and income to protect themselves from price shocks. These households may have to choose between paying heating bills and buying food when facing unexpected increases in energy prices.

That the impacts of energy price shocks were not larger suggests that Federal assistance programs, such as the Supplemental Nutrition Assistance Program (SNAP) and the Low Income Home Energy Assistance Program, might have played a role in helping poor families cope with unexpected increases in energy prices.