Although Small, Markets Have Been Expanding for GE Crops With Traits That Increase Nutrient Content or Improve Taste

Genetically engineered (GE) crops are plants with genetic material that has been altered to achieve one or more desirable features. For example, herbicide-tolerant GE crops can withstand certain chemical herbicides designed to eliminate weeds growing alongside the crop. These traits tend to simplify farmers’ weed management and can contribute to reduced chemical use in some crops. In 2016, at least 75 percent of planted corn, soybean, and cotton acres in the United States were herbicide tolerant.

Although small, markets have been recently expanding for GE crops with traits that increase nutrient content or improve the taste of certain foods for consumers. Between 2013 and 2016, at least 40 percent of safety and nutritional consultations for GE crops received by the U.S. Food and Drug Administration (FDA) covered these types of traits. Consultations determine whether a GE food will be as safe as a food from a similar but conventionally bred crop, and are filed by companies that have developed GE plant varieties under FDA’s voluntary Plant Biotechnology Consultation Program. The U.S. Environmental Protection Agency (EPA) and USDA’s Animal and Plant Health Inspection Service (APHIS) also regulate GE crops, but not for food safety purposes. EPA regulates pesticides, including plants with GE-based protectants, while APHIS regulates field testing of GE crops that could create pest problems.

FDA consultations for browning- and bruising-resistant apples were initiated in 2011, and the Agency approved in late 2016 a pink-fleshed pineapple with increased levels of antioxidants. FDA also received six consultations in 2013 for GE potatoes with reduced potential to brown, bruise, and form acrylamide—a food safety concern. Since then, more than 40 million pounds of these potatoes have been harvested in the United States. More recently, these same potato varieties have also been engineered to resist late blight, the disease that started the Irish potato famine of the mid-nineteenth century.

When new GE foods are introduced, consumer perception often affects demand for those products. ERS research tested the effects of different information on consumer demand for GE potatoes and potato products. Consumers who received information about the benefits of GE potatoes, as well as the risks of acrylamide exposure, were willing to pay a premium of $0.43 for a 5-pound bag of fresh Russet GE potatoes. The national average price was $2.80 in 2013, the latest data available.

By comparison, consumers who received only information about the risks of acrylamide exposure were willing to pay a premium of $0.55. And those who received information about the benefits of GE potatoes–but also concerns about the safety of GE foods–were willing to pay $0.28 less. Although research to date has found GE foods to be safe, these results are in line with other studies that find consumers generally respond differently to positive and negative information. 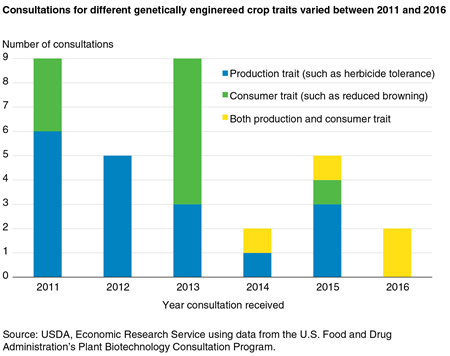