USDA’s Special Supplemental Nutrition Program for Women, Infants, and Children (WIC) provides nutritionally at-risk, low-income, pregnant, postpartum, and breastfeeding women, as well as infants and children up to age 5, with supplemental foods, nutrition counseling, and access to health services. These WIC benefits are provided at no cost to the participant. In fiscal 2016, an average of 7.7 million people per month participated in WIC, about half of whom were children.

Most participants acquire their WIC foods by redeeming a voucher, check, or electronic benefits transfer card for the foods specified in their WIC package at a store authorized to accept WIC benefits. The types and quantities of foods vary with the participant category, breastfeeding status, and age of the infant.

To encourage whole grain consumption among WIC participants, USDA revised the WIC food packages in October 2009 to include whole wheat or whole grain bread, whole grain breakfast cereals, soft corn or whole wheat tortillas, brown rice, and other whole grain foods. The Dietary Guidelines for Americans recommend consuming at least 3 ounces of whole grain food products per day (based on a daily 2,000-calorie diet) and that whole grains constitute at least half of all grain products consumed. The 2009 revisions to the WIC packages also added fruits and vegetables and lower fat dairy products, and allowed for more opportunities for product substitution. 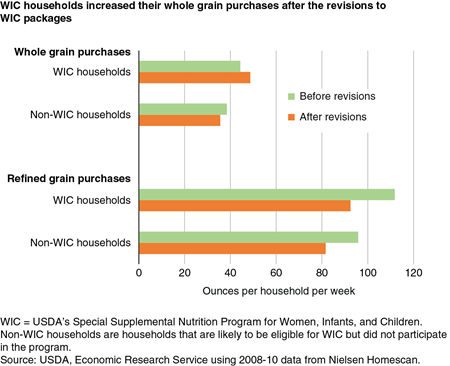