Many consumers want information about how their food is produced, including how farmers raise the animals they eat. Consumers have concerns that span the environmental, social, and personal and public health implications of their food choices. They rely on claims on product labels to help them make choices about what types of meat and poultry products to buy in the grocery store. Such claims include “raised without antibiotics,” “humanely raised,” and “organic.”

These animal-raising claims describe one or more practices that happen on the farm. Though farmers incur higher costs to raise animals with more space or without antibiotics, for example, farmers and the firms they supply can charge a higher price by differentiating their products from those raised using conventional practices, and some consumers are willing to pay the higher price. The use of voluntary animal-raising claims in concert with new production practices can encourage the creation of new markets. And, by allowing consumers to purchase products with characteristics they care about and are willing to pay for, society’s welfare can benefit, assuming these claims are truthful, credible, and understandable to consumers.

However, two issues may affect how well these label claims function: (1) consumers may not understand livestock production and/or may find label claims confusing, and (2) consumers may find it difficult to verify the claims without the help of the Government or another organization. Some claims, such as the USDA Organic label, can only be used on products that meet private or Government standards and undergo third-party certification or verification. Other claims are not subject to these rules and hinge on consumers trusting that a company is doing what it says it is doing.

Challenges may arise for firms as well as consumers when firms introduce label claims about farm practices (for example, how animals were raised) in the absence of universally accepted definitions or requirements for such claims. In 2007, two firms introduced label claims that their chickens were “raised without antibiotics” (RWA). At that point, there were no clear definitions of RWA or requirements for use of the claim on a product, and the firms were using different production practices. USDA’s Food Safety and Inspection Service requested that one firm remove its antibiotic claims, and evidence presented as part of a court case between several firms suggested that that same firm’s label claims had been false and misleading to consumers, suggesting consumers ultimately did not receive the benefit they expected from the price premium they paid for that firm’s RWA chicken. While universally accepted definitions or requirements for farm production practices can be costly to establish and verify, this example demonstrates some of the economic impacts and uncertainty that may arise when firms develop label claims in the absence of such definitions. 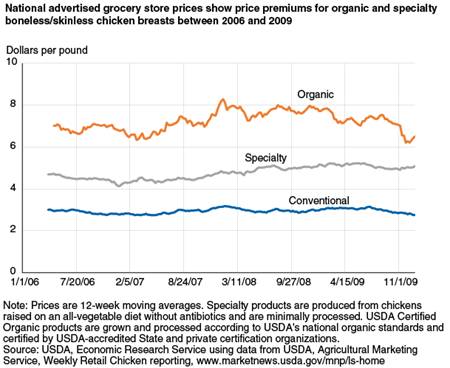