For Beginning Farmers, Business Survival Rates Increase With Scale and With Direct Sales to Consumers

Beginning farmers—those who have managed a farm or ranch for 10 years or less—generally have lower rates of business survival than more established farm operators. According to Census of Agriculture data, only 48.1 percent of beginning farmers having positive sales in 2007 also reported positive sales in 2012, compared with 55.7 percent of all farms. Among beginning farmers, those who operate larger operations are more likely to continue farming than those operating smaller operations. In addition, selling directly to consumers—at roadside stands, farmers’ markets, pick-your-own farms, onfarm stores, or community-supported agricultural arrangements (CSAs)—might offer advantages to beginning farmers that can help them remain in business in a risky and competitive environment. A recent ERS study finds that beginning farmers with direct-to-consumer (DTC) sales are more likely to continue farming than beginning farmers who market through traditional channels. As noted in a March 2016 Amber Waves article, the same holds for farms in general.

Among beginning farmers, 54.3 percent of those with DTC sales in 2007 remained as operators of the same business in 2012, compared with 47.4 percent of those without direct sales. This pattern holds across four size categories (defined by annual sales): beginning farmers with DTC sales had a higher survival rate (measured as the share of farmers who reported positive sales in 2007 and 2012) in each category. The increase in survival rates was substantial—ranging from 9 percentage points for the smallest farms to about 4 percentage points for the largest.

Several factors may help explain why DTC marketing could enhance farmers’ chances of remaining in business. By selling directly to consumers, farmers can usually obtain a higher product price in exchange for more time spent marketing. One advantage with this arrangement is that farmers can achieve a certain level of sales with less machinery and land—and may therefore have to borrow less. In fact, the Census data show that farms with direct sales had lower debt levels than similarly sized farms with no direct sales. A more secure income stream may also help account for some of the increase in survival rates. Income from DTC marketing depends on the margin between the wholesale and retail price. Even when the farmer’s input and output prices vary, the markup between the wholesale and retail prices tends to be relatively stable. Hence, the additional income that farmers can earn by selling directly to consumers should not vary substantially because of price fluctuations, making their farm income less risky. 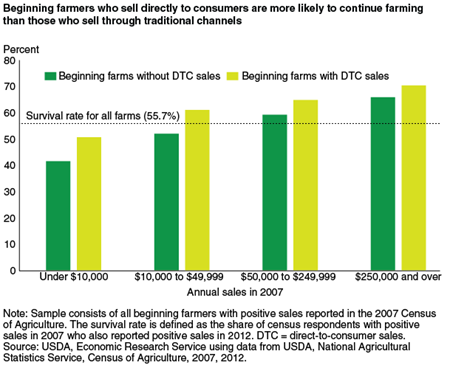