by Annemarie Kuhns and Ryan Kuhns

The all-items Consumer Price Index (CPI) measures overall price changes across seven major household spending categories: housing, transportation, food, medical care, apparel, education and communication, and recreation.  According to the Consumer Expenditure Survey, the average American household allocates 12.6 percent of its expenditures on food, both at home and away from home, making food the third largest expenditure category behind housing and transportation. Typically, food price inflation moves in the same direction as economy-wide inflation, but their magnitudes may vary.

However, throughout much of the 1990s and early 2000s, food price inflation was lower than economy-wide inflation, including 5 consecutive years from 1991 to 1995. Rising prices for medical care and housing helped push up the all-items CPI during those years. Annual price increases for these two categories in 1991-95 ranged from 4.5 to 8.7 percent for medical care and from 2.5 to 4.0 percent for housing.

In 2015, food prices increased 1.9 percent, a smaller rise than the 2.4-percent increase in 2014. Declining prices for pork, dairy, fats and oils, and fresh fruit helped ease food price inflation. Economy-wide inflation measured 0.1 percent in 2015, in large part due to a 7.8-percent decrease in transportation prices as a result of lower oil prices. 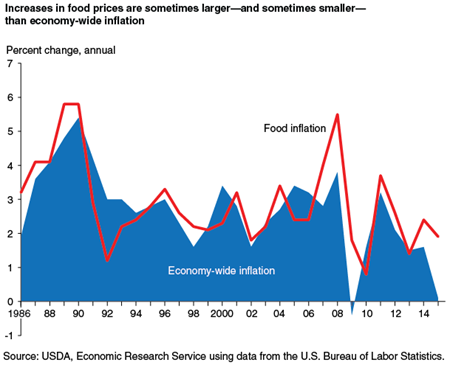