Hydraulic fracturing for natural gas and oil trapped in shale formations, commonly referred to as “fracking,” impacts agriculture in many ways. Farms in shale regions, for example, face competition from energy companies for labor, water, and transportation infrastructure—as well as an increased risk of drilling-related soil or water contamination. But farmers may also earn payments from energy companies.

Whether fracking’s net effect on a farm is positive or negative depends largely on who owns the farm’s mineral rights. Shale formations often overlap with conventional oil and natural gas fields, and in these regions with historical drilling activity, landowners are likely to have sold their mineral rights in the past and are thus not compensated for energy development on their land. In contrast, farmers who own their mineral rights may receive a bonus payment for signing a lease agreement with an energy company and royalty payments when energy production begins.

Income from royalties or leases associated with energy production is not uncommon—particularly in States like Oklahoma, Utah, and Kansas, where about 20 percent of farm businesses received such income in 2014. In States with active development of shale oil or gas, about 12 percent of farm businesses received, on average, $65,781 in income from energy production, compared with 6 percent and $56,162 across all States. Average lease and royalty payments in 2014 were highest in North Dakota ($157,000) and Pennsylvania ($154,000), mainly due to oil and gas drilling in the Bakken and Marcellus shales, respectively.

Royalties or leases associated with energy production can form an important part of farm-related income. In 2014, energy-related income accounted for 4 to 6 percent of gross cash farm income in Oklahoma, Pennsylvania, and Texas. And total payments to farm businesses from energy companies reached $2.9 billion in 2014, up from $2.3 billion in 2011. Declining oil and natural gas prices will likely be reflected in royalties associated with existing leases as well as in future lease and purchase agreements for oil and gas rights. 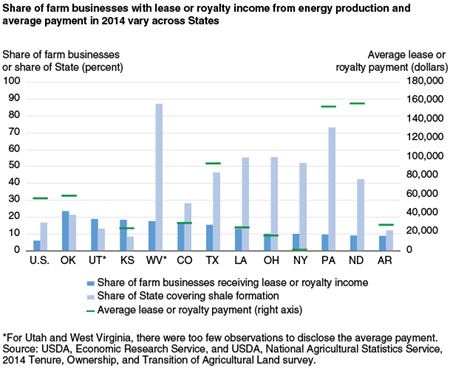