Purchases of Foods by Convenience Type Driven by Prices, Income, and Advertising

The term “convenience food” was first coined by Charles Mortimer of General Foods in the 1950s in response to Americans’ desire for foods that were “easy to buy, store, open, prepare, and eat.” Such demands from consumers brought instant rice, Tang, and TV dinners to supermarkets in the 1950s. Today, these foods share shelf space with canned spaghetti and instant soups, along with rotisserie chickens and kale salads in the deli section. Snacks and meals prepared outside the home by restaurants and other eating places are a further step along the convenience continuum, eliminating a trip to the grocery store and cleanup time. A recent ERS analysis of data from 1999 to 2010 found that—as with many goods—changes in prices and income were the most important drivers of consumers’ purchases of foods in grocery stores and at eating places. Changes in advertising expenditures were an additional influence on purchases of fast foods.

For the study, the researchers grouped restaurant meals and snacks into fast food and sit-down eating places. Grocery store foods were categorized into four groups based on the amount of time the food saves households in meal preparation, from least to most convenient:

Basic and complex ingredients, which offer the least convenience, are foods used to prepare a meal or snack

Between 1999 and 2006, the share of the average household food budget—defined as total expenditures at grocery stores and eating-out places—allocated to basic and complex ingredients fell steadily from around 24.7 to 20.8 percent but began to climb thereafter to 24.2 percent in 2010. During the same period, the share spent on RTC/RTE meals and snacks followed a somewhat similar, but muted, pattern.

An upturn in food budget share devoted to ingredients and RTC/RTE grocery foods began almost a year before the 2007-09 recession and its aftermath—a time when many consumers cut back on eating out, especially fast food meals and snacks. The share of the total food budget spent in fast-food outlets where customers order and pay at a counter grew until 2007 to 30.6 percent, then declined sharply to 25.7 percent in 2010. The share spent at sit-down restaurants—where customers order from waitstaff and pay after eating—increased slightly to 28.4 percent in 2004 and then declined to 23.0 percent in 2010. 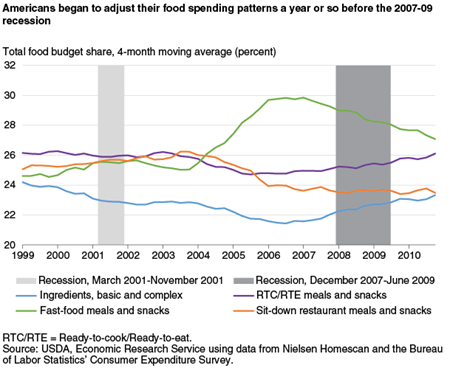