Food Insecurity Among Children Declined to Pre-Recession Levels in 2015

The year 2015 marked the most significant annual improvement in food security since the Great Recession ended in 2009. The share of U.S. households that were food insecure—those that had difficulty at some time during the year providing enough food for all their members due to a lack of resources—fell from 14.0 percent in 2014 to 12.7 percent in 2015. Declines in food insecurity were even larger for the Nation’s children. In 2015, 16.6 percent of households with children were food insecure, down from 19.2 percent in 2014, meaning that 2.2 million fewer children in 2015 lived in households that had trouble putting adequate food on the table for all their members.

A subgroup of food-insecure children face a more severe situation—very low food security. In 0.7 percent of U.S. households with children in 2015, caregivers reported that children were hungry, skipped a meal, or did not eat for a whole day because there was not enough money for food. Like food insecurity among children, very low food security among children was also down from its peak of 1.3 percent in 2008. 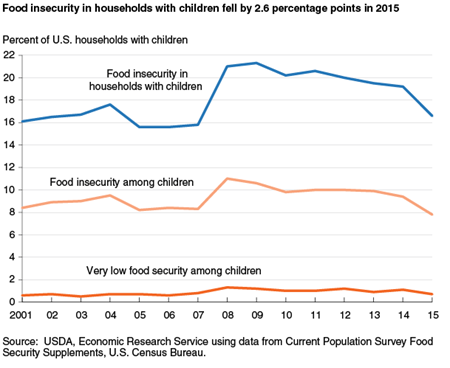