by Thomas Hertz and Tracey Farrigan

During the 1950s and 1960s, the adage “a rising tide lifts all boats” broadly applied to the U.S. economy. As average family incomes grew, the share of the population living in poverty fell rapidly. In the 1970s and 1980s, however, this relationship changed. Prior economic analyses have documented that during this period, average incomes continued to rise, but poverty increased. This indicates that incomes did not rise for families near the bottom of the income distribution. In other words, income inequality increased, and this translated into higher poverty, even though the economy was growing.

The recent increase in rural (nonmetropolitan) child (age 0 to 17) poverty suggests that a similar dynamic is still at work. According to the Current Population Survey, the source for official Federal Government estimates of poverty, rural child poverty grew between 2003 and 2007, even as the national economy expanded. Between 2007 and 2010, rural child poverty increased again, as might be expected given the profound economic recession of 2007-09. But the rural child poverty rate continued to rise through 2012, despite the resumption of economic growth at the national level. Finally, between 2012 and 2014, rural child poverty began to decline, but its level in 2014 remained well above that of 2003.

Why has rural child poverty risen, even in times of national economic growth, and why it has not returned to pre-recession levels? To answer these questions, ERS researchers calculated the relative importance of average growth (or decline) in rural incomes versus changes in rural income inequality, in generating this decade-long net increase in rural child poverty. Findings complement those from ERS studies on rural employment trends by shining light on the degree to which new rural jobs are being captured by low-income families with children.

Thus, part of the increase in rural child poverty can be attributed to the inability of rural average incomes to keep pace with national average incomes during the expansions of 2003-07 and 2010-12. But, average income trends during the period do not tell the full story, particularly when considering the experience of lower income families, those near the poverty line. Average income for the lowest income quartile of rural families with children fell by 6.0 percent during the expansion of 2003-07, 4.6 percent during the recession years, and 10.1 percent during the initial years of the economic recovery, 2010-12. Although incomes for this group grew strongly between 2012 and 2014, they still remained 13.4 percent below their 2003 levels. In other words, between 2003 and 2014, incomes at the bottom of the economic pyramid fell much faster than the average, which implies that rising rural income inequality contributed to the increase in rural child poverty. A more detailed look at the components of income for these bottom-quartile families shows that their declining incomes were primarily driven by a 20-percent decline in annual hours of work per family between 2003 and 2014. 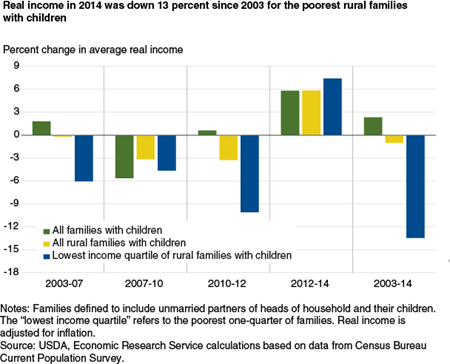 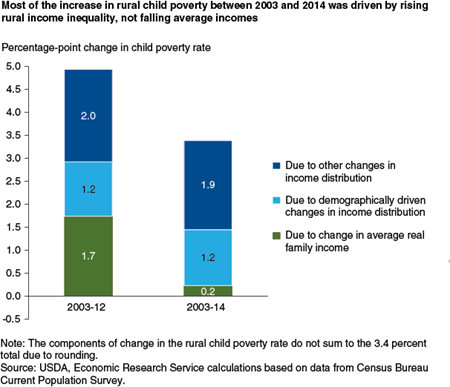 Lastly, model results show how changes in each of the demographic variables examined contributed to the increase in poverty for rural families with children between 2003 and 2014. An increase in the number of children in the average rural family (which rose from 2.37 to 2.48) worked to raise poverty by 0.6 percentage points, while declines in the number of adults of prime working age (which fell from 1.67 to 1.64) and in the share of household heads that were married (which fell from 71.7 to 66.3 percent) raised rural child poverty by 0.9 and 0.7 points, respectively. A slight increase in the average age of the household head helped reduce rural child poverty by 0.5 percentage points. The most beneficial demographic change, however, was a rise in the share of rural household heads with a college degree, which rose from 15.8 to 19.5 percent, lowering poverty by 0.9 percentage points.

By 2014, the average income for rural families with children had almost recovered to its pre-recessionary level, yet rural child poverty remained elevated. This implies that income inequality in rural America had worsened; that is, the gap between the bottom and middle of the income distribution that existed prior to the Great Recession of 2007-09 had widened. ERS finds that this growth in income inequality accounted for most of the net increase in rural child poverty observed between 2003 and 2014.

Rising income inequality is often conceptualized as a matter of the increase in the gap between the top 1 percent and the bottom 99 percent of income earners, but ERS findings imply that inequality is also rising between the bottom income quartile and the rest of the population, and that this effect has exacerbated rural child poverty. Because labor income is the largest component of family income, the primary source of rising inequality lies in the labor market, which suggests that jobs creation in rural areas may help alleviate rural child poverty. However, the strength of the link between jobs creation and poverty reduction depends critically on whether low-income families have the skills needed to fill these new jobs. Further research is needed to help determine the best way to stimulate rural employment that matches with workers’ current skills and to ascertain the effectiveness of different educational and skills training policies in addressing any remaining skills deficits.

The official Federal Government definition of poverty uses data from the Census Bureau’s Current Population Survey (CPS) and is based on self-reported pre-tax money income, adjusted for household size and, over time, increases in the cost of living. In 2014, the official poverty line was $24,008 for a family of four (two adults and two related children).

This measure does not capture the poverty-alleviating effects of tax credits such as the Earned Income Tax Credit and the Child Tax Credit. It also does not capture the benefits of noncash transfers, such as food and nutrition assistance provided via USDA’s Supplemental Nutrition Assistance Program. These programs have significantly improved well-being, especially among children, and their effects have gotten stronger over time. Nevertheless, analyzing the pre-tax-and-transfer money-income-based poverty rate helps us understand why—and the extent to which—the market economy leaves some families below the poverty threshold.

ERS makes one important modification to the definition of child poverty, which is to include unmarried partners of the head of household and their children, in the same family unit as the head, as recommended by the National Research Council, rather than dividing them into separate families, as does the Census Bureau’s official definition. This adjustment reduces measured child poverty by 2 to 3 percentage points, because it locates more children in multi-adult families, whose resources are more likely to exceed the poverty threshold, even taking into account the larger family size. It also reduces ERS’s estimate of the amount by which rural child poverty rose between 2003 and 2012 from 6.6 percentage points (official estimate) to 4.9 percentage points (estimate using modified family units). For the full period, 2003-14, however, ERS’s estimate of the change in rural child poverty (3.4 percentage points) is similar to the official published result (3.6 points).

The measurement of poverty is also complicated by the fact that different data sources yield different results. The American Community Survey (ACS) provides an alternative estimate, based on a less-detailed questionnaire but a larger sample. The ACS and the CPS report very similar results for rural child poverty for 2007 through 2012 but diverge thereafter. Between 2012 and 2014, rural child poverty as measured by the CPS fell by 3.0 percentage points, whereas according to the ACS, it only declined by 1.0 percentage points. When ERS implements the modified definition of the family resource unit in the CPS data, the change between 2012 and 2014 is 1.6 percentage points.

To assess the impact of declining average income between 2003 and 2014, ERS calculated the average percentage change in income for all families with children and applied it to each family found in the 2003 survey. Then, researchers compared each family’s resulting income level with the appropriate poverty threshold to determine the share of children that would be judged to be living in poor households. Comparing this figure to the actual poverty rate for 2003 tells us by how many percentage points poverty would have increased if all rural families had experienced the average rate of income decline. Any additional increase in rural child poverty must therefore reflect greater-than-average income losses among lower income families, who are near the poverty line and susceptible to falling below it. This additional increase in poverty was driven not by trends in average income for all families but rather by an adverse change in the distribution of income, reflecting a growing gap between the incomes between lower income rural families and the average rural family.

The share of the rise in rural child poverty that is explained by changes in income inequality was further broken down into two components. The first reflects the effects of changes in rural demographics, including the size and composition of families, and the age, sex, race/ethnicity, country of birth, marital status, and educational level of the head of household. ERS measured the effects of these demographic changes by reweighting the 2003 data set so that it has the same demographic proportions as the 2014 data and looking at the effect this had on child poverty. (This analysis was then supplemented by an additional statistical analysis of the relation between the demographic variables and child poverty.) The final component of the increase in rural child poverty was then determined as a residual: it reflects any remaining increase that cannot be explained by declining average income, or by changes in the chosen demographic variables.