From 2004 to 2012, the United States rose from being the world’s third-leading poultry meat exporter, behind the European Union (EU-28) and Brazil, to the top position, which it continues to hold. During the same period, Sub-Saharan Africa (SSA) became an increasingly important market for U.S. poultry. In 2004, the U.S. exported nearly 89,800 metric tons of poultry to SSA; by 2014, the amount had grown to 455,000 metric tons. The EU-28 and Brazil, the next highest poultry exporters to SSA in 2014, shipped 399,000 and 258,000 metric tons, respectively. The surge in U.S. poultry exports to SSA is a result of the region’s growing per capita income, urbanization, population growth, and shortages in domestic production, which bolster demand for poultry (broiler, chicken, turkey, ducks, geese, and guinea fowls). SSA accounted for 13 percent of U.S. poultry exports in 2014, making it the second-largest destination for U.S. poultry after Mexico (24 percent).

SSA—the region between North Africa (Algeria, Egypt, Libya, Morocco, and Tunisia) and the Republic of South Africa (RSA))—accounted for nearly all U.S. poultry sales to Africa in 2014 ($523.6 million for SSA, compared with $557.2 million for all of Africa). The North African markets are mainly supplied by Brazil: North African consumers prefer whole birds, and U.S. exports largely comprise frozen leg-quarter chicken cuts or dark meat, as U.S. consumers generally prefer white meat or breast cuts. At the southern end of the African continent, poultry exports to the RSA are dominated by the EU-28. The U.S. had been the largest supplier of poultry to the RSA, but exports declined substantially following the imposition of anti-dumping tariffs on U.S. products in 2000, which decreased U.S. exports from 25,027 tons in 1999 to 2,688 tons in 2001. Although U.S. poultry exports to RSA regained strength over time, the 2012 tariff hike pushed U.S. exports down from 31,705 tons in 2011 to 16,541 tons in 2014.

Constraints in the Northern and Southern African markets steered U.S. poultry exports to the continent more to Sub-Saharan African markets. This resulted in a growth rate of 62 percent for U.S. shipments to SSA during 2010-14, much higher than that for exports from the EU-28 (42 percent) and Brazil (20 percent). 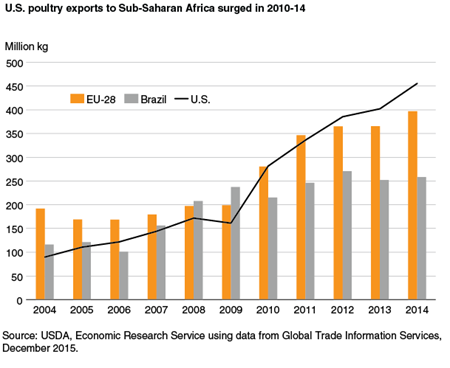