U.S. farmers used genetically engineered (GE) seed varieties containing traits to tolerate herbicides used for weed control and to resist other pests on over 90 percent of corn, soybean, cotton, canola, and sugar beet acreage in 2014. GE varieties were also used to produce a smaller percentage of the U.S. alfalfa, sweet corn, squash, and papaya acreage in 2014. Breakfast cereals, chips, soy protein bars, corn syrup, vegetable oil, and many other processed food products contain ingredients made from these GE crops. However, many consumers choose to purchase foods containing ingredients made from non-GE crops. According to the Nutrition Business Journal, U.S. sales of organically grown food (which excludes GE seed) approached an estimated $37 billion in 2015, and a market for conventionally grown foods produced without GE seed has emerged.

U.S. organic and other non-GE farmers use various avoidance practices to minimize accidental crop mixing. Recent USDA organic surveys show that producers commonly use buffer strips to minimize pesticide drift, pollen drift, or both. Another approach is to delay crop planting until after any nearby GE crops are planted. While soybeans are mostly self-pollinating and the risks of cross pollination are minimal, the risks for corn are higher because most corn pollination results from pollen dispersal by wind and gravity. In USDA’s most recent corn survey, delayed planting was reported on two-thirds of planted organic corn acreage. The average planting date for organic corn producers was about 2 weeks later than that for conventional corn producers in Wisconsin, Nebraska, Michigan and Kansas. In Ohio and Iowa, organic producers planted 3 weeks later than neighboring farms, and in Indiana and Missouri, the delay was 1 month. While this strategy provides protection against commingling of GE and non-GE crop pollen, growers may realize lower yields from planting at a suboptimal time.

If organic and non-GE crops test over the tolerance level, producers are likely to experience economic losses. They are likely to lose the price premium they expected and may incur additional transportation and marketing costs to sell their crop at a discount. USDA collected data on the economic impact of unintended GE presence in organic crops in a recent organic producer survey; similar data have not yet been collected for conventional non-GE crops. One percent of all certified organic farmers in 20 States reported that they experienced economic losses from the unintended presence of GE material in their crops during 2011 through 2014. These losses arose when the producer’s organic crop exceeded their buyer’s GE tolerance level; data are not available on the costs that organic and non-GE crop producers incurred to avoid commingling of GE products with their crops. More organic and conventional non-GE producers may experience losses if GE seed varieties are commercialized for more fruits, vegetables, and other food crops. 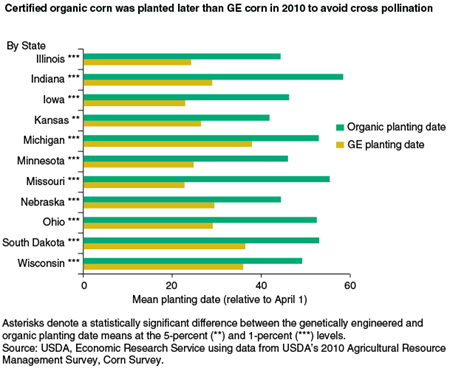