The Power of Proximity: Ethanol Refineries Drive Increased Corn Planting in Their Vicinity

Between 2005 and 2010, increasing demand for biofuels contributed to growth in U.S. corn area by more than 6 million acres and channeled a third of U.S. corn output into ethanol feedstock. An understanding of the multiple effects of this rapid growth on rural economies can help inform policies geared toward greater economic and environmental sustainability. Focusing on just one of these effects, ERS researchers estimated the extent to which biofuel expansion helped reshape the spatial pattern of acreage and planting decisions across a wide swathe of the U.S. Corn Belt.

To measure the impact of ethanol demand on local agriculture, ERS researchers examined farmers’ crop decisions in response to the introduction and expansion of ethanol refineries in their area. The researchers used annual crop data to analyze the impacts of ethanol refineries on area planted to corn in 12 States between 2006 and 2010. Using high-resolution data, originally collected with the help of remote sensing satellites, they tracked year-to-year changes in crop acreage. The production data, together with information on ethanol refinery locations and capacities, enabled them to observe the responses of corn growers for each year during the study period. Findings reveal a statistically significant and large acreage response by corn growers to the nearby presence and capacity of an ethanol refinery. On average, in 2006, a 1-percent rise in a neighborhood refining capacity led to an increase in corn acreage by 1.5 percent and total agricultural acreage by 1.7 percent. Put differently, an increase of 1 million gallons in a refinery’s capacity in 2006 led to an additional 67 acres of corn planting within a 100-kilometer radius from the refinery.

Later years in the study period saw farmers similarly add more acres in response to refinery capacity expansion, though not as much as in the first year. The largest effects of increases in refineries’ capacities were observed in locations with very low corn acreage and total agricultural acreage, suggesting that much of the corn expansion occurred in formerly uncultivated and potentially low-quality land areas. Although the size of the effects diminished with distance, a change in refining capacity was felt on farms up to 200 kilometers away. The rising area planted in corn and total agriculture, particularly in areas near ethanol refineries, highlights the increasing linkages between agriculture and energy markets and the visible effects of the biofuels sector on rural landscapes and economies. 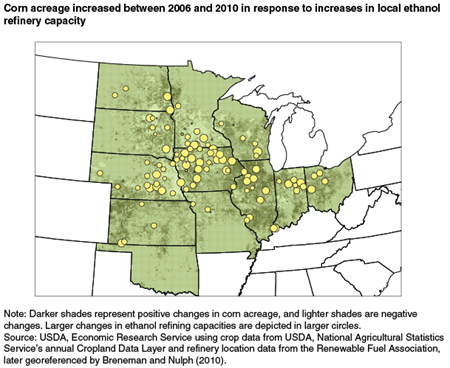