Prices of oil and biofuels, agricultural land use, and commodity markets are linked through a complex web of interactions. In Brazil, a major consumer and producer of ethanol and a leading commodity exporter, changes in oil prices could lead to major shifts in the country’s cropping patterns and, as a result, changes in world commodity prices. Cheap oil, for example, reduces demand for biofuels, which means less area in Brazil is planted to sugarcane, the country’s main feedstock for ethanol, and more area is planted to other crops, such as corn and soybeans, or used for grazing. Sugarcane accounts for 14 percent of Brazil’s total cropland (65.4 million hectares); grazing lands total 154.7 million hectares (1 hectare = 2.47 acres).

Under the high-oil-price scenario, where oil prices increase on average by 45 percent above the reference price, demand for ethanol in Brazil rises 8 percent annually between 2015 and 2024, boosting ethanol prices and driving expansion in sugarcane production. As a result, land allocated to sugarcane expands by nearly 1 million hectares (0.9 percent) above the reference scenario, while area planted to food and feed crops falls by 2 million hectares (0.3 percent) during the period. With lower production, Brazil’s exports of commodities such as soybeans, corn, cotton, and rice decline, putting upward pressure on world prices. The average price of corn, for example, increases by an annual average of 4 percent during the projection period under this scenario.

Sustained low oil prices would bring about the opposite effect. Oil prices averaging 32 percent below the reference price would lead to declining demand for ethanol (16 percent annually between 2015 and 2024) and sugarcane—the recent 69-percent decrease in oil prices from the 2014 average to January 2016 would likely strengthen the low-price effects identified in this study. As a result, area planted to sugarcane falls, freeing up nearly 4 million hectares of land for other crops and for grazing. With decreasing agricultural production costs—resulting from the drop in prices of agricultural inputs (energy, fertilizer, etc.)—and additional land previously planted to sugarcane becoming available for planting other crops, Brazil’s exports of sugar, soybeans, corn, cotton, and rice increase, leading to a drop in world prices of these commodities during the projection period. For example, corn and rice prices fall 3 percent and cotton prices fall by about 2 percent in 2015-24. 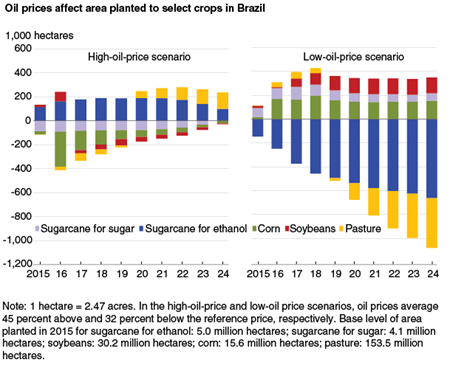