Butter and Margarine Availability Over the Last Century

by Jeanine Bentley and Mark Ash

The history of butter and margarine consumption in the United States over the last century is one of wartime shortages, a growing supply of soybean oil, low-priced substitutes, and evolving health advice. ERS’s butter and margarine availability data—which provide annual estimates of per capita supplies available for U.S. consumers to eat and which serve as a proxy for consumption—can help tell this story.

For the first half of the 20th century, U.S. butter availability dwarfed that of margarine. Availability during the period averaged 16 pounds per person per year for butter, compared with 2.8 pounds per person for margarine. Shortages and rationing of butter during World War II led consumers and food processors to substitute margarine for butter. Post-World War II, many earlier public policies and restrictions on margarine (including restrictions on coloring) were relaxed. In addition, some consumers had become more accustomed to the taste of margarine, and the cheaper cost of margarine relative to butter also favored the switch ($0.23 per pound for margarine, compared with $0.71 per pound for butter in 1946). At the time, margarine was touted as a healthier alternative to butter because it contained less saturated fat.

Margarine’s lower price and expanding supplies in the post-war years stemmed from an ever-growing supply of soybean oil, which coincided with increased demand for soybean meal to feed livestock. Originally, margarines were prepared from a blend of animal fats—such as tallow and lard—with semi-solid palm, palm kernel, and coconut oils. By the 1930s, margarine was primarily made from domestically produced vegetable oils that were partially hydrogenated to convert the liquid oils into a spreadable product that is semi-solid at room temperature. Between 1942 and 1972, butter availability fell from 16.4 to 5.0 pounds per person per year. Over the same period, margarine availability steadily increased, surpassing butter in 1958 at 8.9 pounds per person and eventually peaking at 12.0 pounds per person in 1976.

In the second half of the 1970s, margarine availability began trending downward, with a steeper decline starting in 1994. By 2005, margarine consumption had fallen below butter consumption, despite butter’s higher price ($3.28 per pound) compared with margarine ($0.89 per pound). Margarine availability continued falling to 3.5 pounds per person in 2010. In 2013, per capita availability of butter was 5.5 pounds. Butter may owe part of its increase in consumption to concerns about trans fats in margarine and more recent suggestions that saturated fat is not as unhealthy as once thought. Together, availability of butter and margarine is close to half of what it was 25 years ago, as food processors, restaurants, and consumers have turned to salad and cooking oils for their added fats and oils needs. 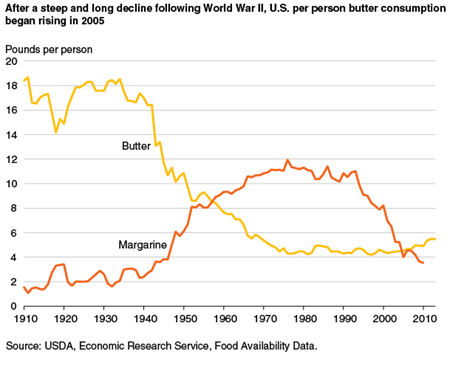