The Number of Midsize Farms Declined From 1992 to 2012, But Their Household Finances Remain Strong

Midsize farms, those with an annual gross cash farm income (GCFI) between $350,000 and $1 million, represent an important link in the chain of family farms. Many midsize farms start out as successful small commercial farms. And, as many as 15 percent of today’s midsize farms will become tomorrow’s large farms.

Between 1992 and 2012, the number of U.S. midsize farms declined by about 5 percent—or just over 6,100 farms. This reflects a farm economy experiencing rapid technological change, rising costs of production, and the increasing profitability of larger farms. Coupled with significant increases in the number of farms with very low sales and large farms with over $1 million in GCFI, the decline of midsize and small commercial farms has led to concerns that they may disappear.

Evidence suggests that much of the decline in midsize farms stemmed from farm exits. More midsize farms exited than entered farming during 1992-97 and 2007-12, which kept overall midsize farm numbers down. Many farm exits were linked to the age of the principal operator, as older farmers were more likely to exit farming. A smaller number of farms exited for other reasons, such as business failure.

Midsize farm numbers also changed due to their transition to other farm sizes as the operation contracted or expanded. Higher grain prices between 2007 and 2012, for example, allowed many midsize cash-grain farms to grow into large farms by renting more land and expanding their operations. As a result, the number of midsize farms fluctuates annually with changes in the broader farm economy, such as crop prices.

While their numbers have declined slightly, midsize farm households have seen their finances improve. Between 1992 and 2014, midsize farms doubled their household income and tripled their off-farm income, in real (adjusted for inflation) terms. Household net worth of midsize farms also increased dramatically over the period, driven by greater farmland values throughout the mid-2000s.

Furthermore, most midsize farm operators earn the majority of their household income from the farm operation. Today’s operators are also more experienced and educated than those from previous periods, with a higher share having some college education or a college degree. Additionally, the percentage of female principal operators on midsize farms has increased slightly since 1992.

Despite the decline in midsize farm numbers, these farms continue to play an important role in U.S. agriculture. In 2014, midsize farms accounted for about 21 percent of total U.S. farm production and 6 percent of U.S. farms. They also generated more net farm income and operate with higher levels of financial efficiency than in 1992. 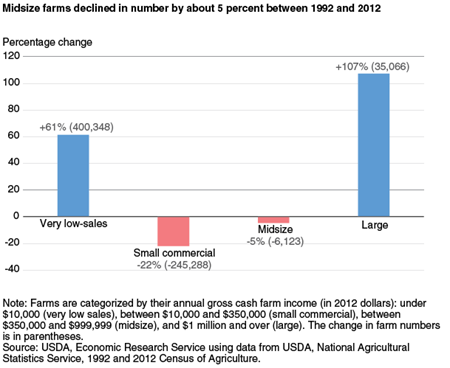