U.S. farms adopted precision technologies at different rates and for different crops between 1998 and 2013. Guidance systems had the highest adoption—used in about half of planted acres for crops like corn, rice, and peanuts. GPS soil mapping and VRT lagged behind with adoption rates under 25 percent of planted acres.

Empirical estimates found that these three technologies provided a small boost to farm profits for corn farms in 2010. For example, on average, VRT increased profitability by about 1 percent and GPS maps by almost 3 percent. Given the similar impacts on corn profits, farm operators might make the decision to adopt each precision technology based on its ease-of-use and functionality. Functionality (or usefulness) increases as a technology provides more information that operators can apply across a wide-range of production practices. Guidance systems have high ease-of-use, while yield and soil maps have high functionality. VRT appears to be low in both ease-of-use and functionality.

The adoption of GPS guidance systems helps reduce operator fatigue and pinpoint precise field locations. Field operators can use guidance systems to auto-steer combines and tractors—and access timely, accurate coordinates from a screen in the cab. Guidance systems also save money by reducing over- and under-application of sprays and improving the seeding of field crop rows. These systems were adopted on 45 to 55 percent of planted acres for several major crops between 2010 and 2013. The ease-of-use and functionality of these systems have increased along with adoption rates. Precision technologies can also help farm operators map their fields better. Yield monitors mounted on combines can collect GPS coordinates that the operator can color code and map to show changes in crop yield across the field. Yield monitors may also store data so operators can compare yields over the years. However, year-to-year yield data are often difficult to interpret, even with a map. Yield maps may only provide feedback from previous harvests after the fact, and factors such as weather and changes in field operations can affect yields. Still, yield maps have grown in popularity as mapping programs on computer tablets have become easier to use. A related precision technology, soil mapping, may offer farmers more actionable data. Soil maps collect core samples and use zones to show soil types, soil nitrate levels, and pH acidity readings. Like with yield maps, farmers use GPS coordinates to plot the data on a map. But analyzing core samples comes at a high cost, often requiring the use of a laboratory to get data on soil characteristics and micronutrients. The number of samples needed to accurately identify the boundaries of a zone on a soil map also lowers ease of use. This has contributed to soil mapping’s relatively lower adoption rate during the period, under 25 percent.

Lastly, variable-rate input application technology (VRT) allows farmers to customize the application of fertilizer, chemicals, and pesticides using GPS data—often from yield and soil maps or guidance systems. Farmers can even use VRT to plant different types of seeds at different locations with a single pass of the tractor. However, installing and maintaining equipment with VRT capabilities comes at a relatively high cost. VRT also requires specialized machinery with automated controls for input flow rates that must be integrated into sprayer or seeding equipment generally tailored to a specific crop. This makes VRT harder to adapt to other crops. As a result, VRT currently has relatively low ease of use and functionality. 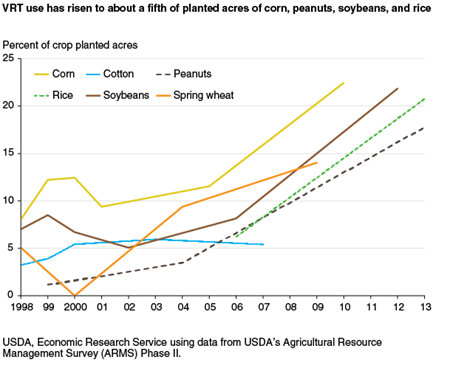 Despite these challenges, VRT adoption has risen in recent years in corn, soybean, rice, and peanut production. Between 2010 and 2013, about 20 percent of planted acres for these crops used VRT. Different factors may help account for the rise in VRT adoption. By fine tuning production practices, VRT may return greater profits and help farmers overcome challenging growing situations, such as highly variable Ph levels in soil. Larger farms also appear to use VRT more often because it is more cost effective when applied to a greater number of crop acres. If these explanations are true, they could indicate that VRT might become more widely adopted under certain circumstances, especially as the technology’s ease of use and inter-equipment functionality improves in the future.