A Look at Calorie Sources in the American Diet

ERS’s loss-adjusted food availability data provide estimates of the sources of daily food energy, or calories, per capita in the United States. These data are derived from the supply of food available for consumption and adjusted for inedible peels and pits, as well as spoilage and other losses that occur from farm to retail and in grocery stores, restaurants, and homes, to more closely approximate consumption.

The 215 commodities in the loss-adjusted data are grouped into 10 categories, 6 that are plant-based and 4 that are animal-based. The amount of calories from animal-based and plant-based food is of interest since foods in the two groups contain different nutrient and caloric densities. Additionally, there is increasing interest in the amounts of energy, water, and land resources used to produce different food products.

Between the 10 years, only 3 of the 10 food categories had changes in calorie amounts greater than 10 percent. Per capita availability of calories from nuts showed the largest percentage change with a 25-percent increase to 72 calories in 2010. There was an 11-percent decrease in calories from both the vegetable and added sugar and sweeteners categories. 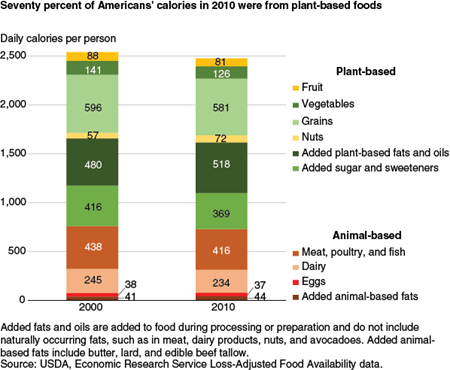