Quantifying the Impacts of Foodborne Illnesses

The U.S. Centers for Disease Control and Prevention (CDC) estimates that each year approximately 48 million people in the United States are sickened by a foodborne illness. Most of these illnesses are not reported to health authorities and the specific cause is not known. In most cases, foodborne illnesses are short lived and treated at home. Other times, medical care is sought, but no tests are run or the illness is not recognized as foodborne. In only 20 percent of U.S. foodborne illness cases (9.4 million illnesses) can a specific pathogen be identified as the cause, presumably for the more serious illnesses.

A foodborne pathogen’s economic burden is determined by both the number and severity of illnesses it causes. For example, Norovirus is the most common U.S. foodborne illness, but one from which 90 percent of infected people recover without seeking medical care. In contrast, Listeria monocytogenes sickens a relatively small number of Americans each year, but almost 20 percent of those infected die. 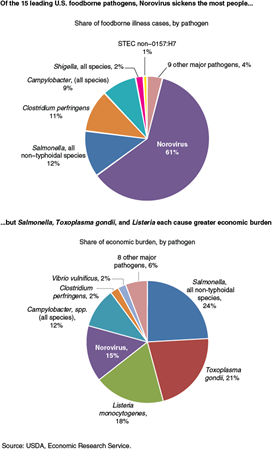 ERS’s new report, Economic Burden of Major Foodborne Illnesses Acquired in the United States, provides materials that could be used by regulatory agencies to conduct cost/benefit analyses, by public health officials to develop food safety educational materials, and by others interested in foodborne illnesses. Pie charts and disease outcome trees visually display the economic burden of the 15 major foodborne pathogens—broken out by health outcome—and highlight the role that severity and long-term consequences play in the burden that each pathogen imposes on society. In addition to estimates of economic burden, the report includes a description of the illness caused by each pathogen and a discussion of the pathogen’s relative importance in terms of traditional public health measures and economic burden. 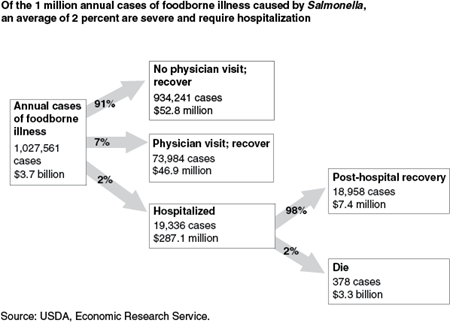 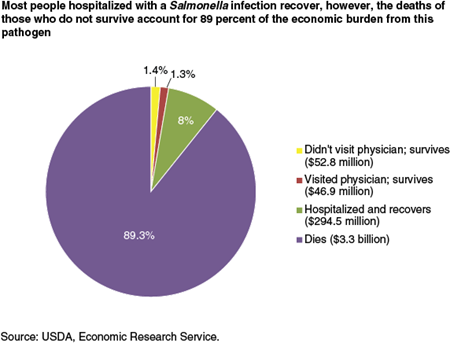