USDA’s Supplemental Nutrition Assistance Program (SNAP) provides monthly benefits to low-income households to supplement their food spending. In general, households are eligible for this assistance if their gross monthly incomes do not exceed 130 percent of the poverty line and if they meet other criteria pertaining to net income and assets. (In 2014, for a family of four, this gross income cutoff amounted to $2,584 a month.) Households with disabled or elderly members can qualify with higher incomes, and some States have adopted higher income thresholds. Data from the U.S. Census Bureau’s 2010 American Community Survey (ACS) found that nationwide, 62.3 percent of SNAP households had annual incomes at or below 130 percent of poverty.

This statistic must be treated with caution, however, since the data available in the ACS differ in important ways from the official SNAP eligibility criteria. SNAP eligibility is based on monthly income at the time of application, whereas the ACS records annual income at one point in the year. Households with relatively high annual income may have been SNAP-eligible for some months of the year due to income fluctuations during the year. Moreover, the ACS defines the household as people living at the same address, which is not always consistent with the SNAP household definition that is based loosely on the nuclear family. The ACS address-based definition often includes household members who are not part of the SNAP household, and whose incomes are not included in determining eligibility for the SNAP household. For this reason, the ACS may understate the percent of SNAP households that had annual incomes at or below 130 percent of poverty.

While use of linked SNAP records on benefit receipt improved estimates of SNAP targeting in New York, these estimates are still based on annual income measures in the ACS and thus do not show the level of targeting that may be revealed by monthly income data. 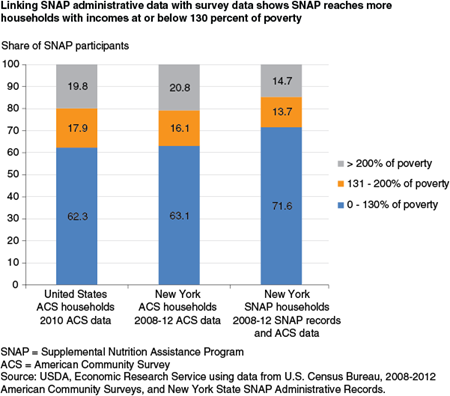