The United States has been the world’s largest producer and consumer of ethanol since 2006, yet until 2010, the United States relied on imports to meet domestic demand. ERS research on recent trends in the global biofuel market shows that in 2010, the United States became a net exporter of ethanol for the first time, exporting 200 million more gallons than it imported. A year later, a combination of falling Brazilian exports and plateauing domestic demand helped the U.S. become the world’s leading ethanol exporter, accounting for nearly 55 percent of global ethanol exports. U.S. ethanol exports continued to be strong in 2014, reaching 837 million gallons.

Despite being the world’s leading exporter, the United States still imports ethanol from other countries, especially Brazil. Between 2011 and 2013 the United States exported more than 2.5 billion gallons of ethanol and imported 1 billion gallons. Imports of ethanol have continued largely due to the U.S. Renewable Fuel Standard, which specifies annual blending targets for a set of biofuel categories. Under the mandate, Brazilian ethanol is classified as an “advanced biofuel” and therefore does not compete with U.S.-produced ethanol, which is classified under a different category. From 2011 to 2013, Brazil imported more than 500 million gallons of U.S. corn-based ethanol to offset its own domestic shortfall, especially in 2011 and 2012.

The future of U.S. ethanol trade will mostly depend on domestic energy policies and policies in major ethanol producing countries. For example, Brazil’s 2014 decision to increase its mandatory blending rate of ethanol from 25-27.5 percent could leave less Brazilian ethanol to compete with U.S. ethanol in the global market. Brazil could also continue to import U.S. ethanol to meet its mandate requirements. At the same time, an increase in the mandated amount of advanced biofuels in the United States could lead to a rise in imports of ethanol from Brazil and other countries. 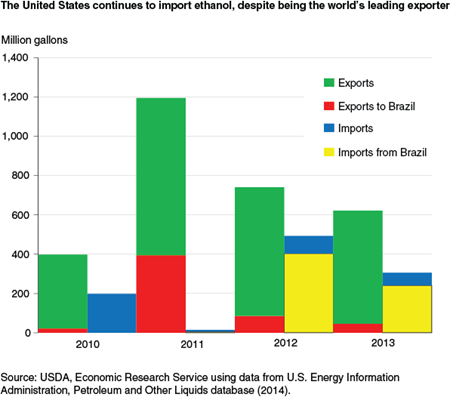