The Gulf of Mexico’s hypoxic zone stems in part from an excess of nutrients, including nitrogen. An estimated 60-80 percent of the nitrogen delivered to the Gulf of Mexico is from agriculture, despite some farmers’ adoption of on-field nitrogen conservation practices. The continued contribution is due, in part, to increased corn production, the single largest source of agricultural nitrogen loadings.

With USDA support, farmers also restore wetlands to capture nitrogen that leaves fields in runoff. Over the last two decades, USDA spent over $4.2 billion to restore and protect wetland ecosystems. Restoring wetland ecosystems requires a re-engineering of soil hydrology, the rejuvenation of aquatic species, and economic incentives to compensate landowners who keep the land out of agricultural production. These costs vary substantially throughout the country.

The nitrogen-removal potential of a wetland depends on many factors, including the concentration of nitrogen in the incoming waters, the amount of time a unit of water spends in the wetland, the quantity of nitrogen that passes through the wetland, and seasonal water temperatures. Nitrogen removal benefits of wetlands vary substantially, even when wetlands are in close proximity.

ERS researchers estimated the costs of restoring previously drained wetlands across much of Wisconsin, Iowa, Illinois, Indiana, Ohio, and western Minnesota. This wetland region, known as the Glaciated Interior Plains (GIP), is a major corn-producing area. Its unique geologic and environmental conditions support wetland ecosystems that remove large quantities of nitrogen from runoff. Most GIP waters move toward the Gulf of Mexico. Wetland restoration opportunities in GIP are abundant—an estimated 90 percent of its wetlands were drained as the land was settled.

Using contract data from USDA’s Wetlands Reserve Program, ERS researchers used a wetland cost model to generate county-level estimates of the upfront costs of restoring and protecting wetlands within the GIP. Costs were found to range from approximately $1,000 to over $2,500 per acre. Researchers used a biological model to generate spatial estimates of the expected quantity of nitrogen a restored wetland can remove, given existing land uses, climate, and geologic conditions. The annual nitrogen removal potential was estimated to range from 11 to 1,800 pounds per wetland acre.

Combining the costs and nitrogen-removal estimates across the GIP, researchers found that 0.2 to 34 pounds of nitrogen could be removed for each dollar spent to restore and preserve a wetland. Stated differently, costs to remove nitrogen ranged from $0.03 to $6.60 per pound. Within the GIP, restoring and protecting wetlands tended to be most cost effective in parts of Illinois, Indiana, and Ohio, even though the costs of wetlands in these areas are relatively high. Estimating the economic benefits of removing nitrogen was not possible and, in such cases, information about where removing nitrogen may be done most cost effectively can be used to help target wetland restoration funding. 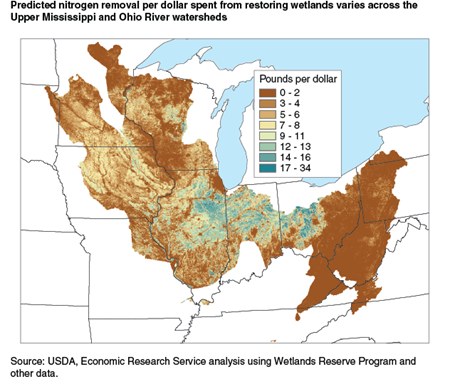