Beginning in the early 1990s, Russia became a large importer of meat, including beef, pork, and poultry, as the country transitioned from a planned to a market economy. During much of that period, Russia was the largest foreign market for U.S. poultry broilers. U.S. exports to the country peaked in 2001 at 1.05 million metric tons (mmt), 42 percent of total U.S. broiler exports. Russia was a much smaller market for U.S. beef and pork, though in 2008 pork exports reached 0.20 mmt, 10 percent of the U.S. total. In 2009, Russian meat imports began to fall; by 2013, imports of broilers had declined to 0.28 mmt.

Russian meat imports rose during the 1990s largely due to a contraction of the country’s livestock sector (both animal herds and product output), which was driven by a decline in government support. In 2000, meat production began to rise, and growth accelerated in the second half of the decade, resulting in declining imports. The rebound in meat output (and the livestock sector in general) can be attributed to increased subsidies from the government and trade protection, in particular a system of tariff-rate quotas on meat imports imposed in 2003. Farm-level changes that improved efficiency, such as the adoption of modern methods for animal husbandry and the move to large and more productive farm enterprises, also accounted for the livestock sector’s rebound.

Growth in the Russian livestock sector has been uneven. The poultry broiler industry has boomed, with output rising from 0.41 mmt in 2000 to 3.01 mmt in 2013. During the same period, pork production increased by almost 80 percent, rising to 2.40 mmt. However, Russian production of beef and dairy goods continues to decline (cheese being the only exception), as the country has yet to modernize these parts of its livestock sector. In August 2014, in response to geopolitical developments centering on Ukraine, Russia banned many agricultural and food imports, including all livestock products, from the United States, European Union, Norway, Canada, and Australia. The ban has further reduced Russian meat imports substantially, as they were down in the fourth quarter of 2014 by about 30 percent compared with the previous year (fourth quarter 2013). Although the ban was initially slated to last for 1 year, it was extended for another year in June 2015. 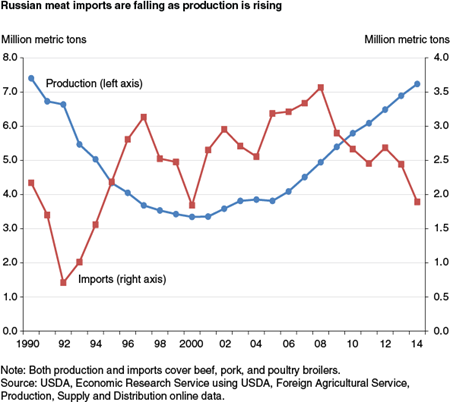