USDA’s Special Supplemental Nutrition Program for Women, Infants, and Children (WIC) is the major purchaser of infant formula in the United States. To reduce costs, WIC State agencies (except Mississippi and Vermont) are required to have competitively bid rebate contracts with formula manufacturers. Contracts are awarded to the manufacturer offering the lowest net price (wholesale price minus the rebate). The winning manufacturer gets an exclusive contract—typically lasting about 4 years—to provide its infant formula to WIC participants in the State. Some State agencies have formed multi-State alliances to jointly request bids.

The infant formula rebate program reduces costs for the WIC program—rebates totaled $1.9 billion and supported about 23 percent of all participants in fiscal 2013. Given the large cost savings for the WIC program from the rebates, understanding the factors and patterns associated with the net price bids offered by formula manufacturers is important. A recent ERS study examined both the winning and losing bids offered by manufacturers seeking contracts with WIC State agencies during 2003-13. Only three infant formula manufacturers—Abbott, Mead Johnson, and Nestlé/Gerber—bid on rebate contracts during this period, and bids varied greatly across manufacturers, suggesting that each manufacturer values each contract differently.

Results suggest that infant formula manufacturers aggressively compete for WIC contracts. In recent years, rebates have been large (over 90 percent of the wholesale price), every contract has received multiple bids, and contracts have turned over about 38 percent of the time. Larger States and alliances (based on the number of infants participating in WIC) generally receive bids with slightly lower net prices than smaller States and alliances. Lower net price bids—both winning and losing—after 2007 may have been partly due to a decline in total sales of infant formula. In the face of a shrinking market for their product, manufacturers may seek to maintain their sales volume by winning WIC contracts. 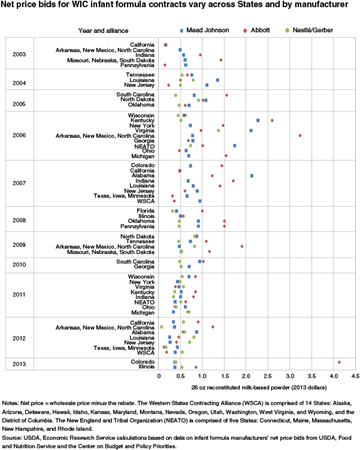