Since European settlement, approximately 50 percent of the wetlands that had covered the contiguous United States have been drained, mostly for agricultural use. Over the past two decades, USDA has spent over $4.2 billion to restore and protect wetlands. Restoring and protecting wetlands requires re-engineering of soil hydrology, rejuvenation of the wetland ecosystems, and the provision of incentives to keep landowners from returning the land to agricultural production. While restoring and protecting wetlands comes at a cost, their ecosystems provide a wide array of benefits that can exceed costs.

Wetlands differ in many ways, as do the mix, quantities, and values of the services their ecosystems provide. The North American prairie pothole wetlands are an example. These wetlands lie in the heart of the continent and produce 50 to 80 percent of the continent’s ducks. Within the United States, they lie primarily in the eastern Dakotas, western Minnesota, and northwestern Iowa. Most of these wetlands are small potholes, and about half are dry by the beginning of June. Ducks from the Prairie Pothole Region (PPR) fly all U.S. flyways and hence provide viewing, hunting, and other benefits to people throughout the country.

The costs of restoring and protecting wetlands, by county, were generated by wetland cost functions. The study found that the expected upfront costs of restoring and preserving new wetlands within the PPR ranged from $200 to over $3,300 per acre, with some of the lowest costs in areas that lie closest to the Missouri River and the highest in major corn-producing areas.

The ratio of the estimated benefits to costs, within each individual mapping unit in the PPR, ranges from near zero to more than nine, depending on the location (see figure). In other words, for each dollar spent on wetland restoration, society may obtain from little to more than $9 in hunting benefits. The estimated benefit-cost ratios are greatest in the western PPR where wetlands are most productive and the costs of restoring and protecting wetlands tend to be lower.

Wetlands of the PPR provide other benefits in addition to serving as breeding grounds for game birds. Therefore, one cannot conclude that wetland benefits are negligible in areas where the benefit-cost ratios reported here are low. The results do provide evidence that the value of wetland benefits in the western portion of the PPR exceed expected costs. Results also illustrate the extent to which benefit-cost ratios can vary with geography, suggesting the importance of targeting wetland restoration expenditures. 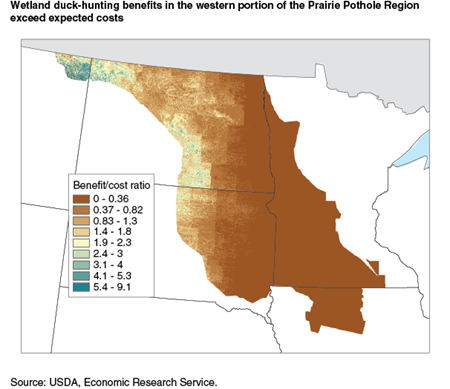