Americans now get an average of nearly 21 percent of their daily calories from beverages, up from 12 percent in 1965. Since calories from beverages may be less satiating than calories from food, consumers may not recognize how many calories they are consuming from beverages, potentially leading to higher total caloric intake. While some beverages—such as milk and 100-percent fruit and vegetable juices—provide important nutrients such as calcium and vitamin C, sugar-sweetened beverages (SSBs) provide few (if any) essential nutrients. As a result, some argue that SSBs have had a super-sized role in contributing to obesity in the United States.

To reduce obesity and improve health outcomes, many States and localities have attempted to limit SSB intake through taxes and other policies. For example, some States levy sales taxes on SSBs or taxes on SSB producers and distributors. Voters in Berkeley, CA, recently approved a 1-cent-per-ounce tax on sugar-sweetened sodas and energy drinks, and restrictions on the container size in which food service establishments can sell SSBs have been proposed in New York City.

Benefits for USDA’s Supplemental Nutrition Assistance Program (SNAP) are delivered to recipients through Electronic Benefit Transfer cards that can be used to purchase foods intended for home preparation and consumption at authorized retailers. (SNAP benefits cannot be used to purchase beer, wine, vitamins, and hot foods, or food that will be eaten in the stores.) Some policymakers and nutrition advocates have suggested that changes to SNAP, such as excluding SSBs from the set of allowable items that can be purchased using benefits, could directly address overconsumption of SSBs among low-income populations who receive program benefits.

Others have argued that such restrictions would have little impact on consumption patterns because SNAP benefits only cover a portion of the household’s total food spending for most SNAP participants. SNAP households could purchase SSBs using the remainder of their food budget. In addition, not all SSBs consumed by SNAP participants are obtained from grocery and other food stores. SNAP participants also use their own money to purchase food and beverages from restaurants, vending machines, or obtain food from family, friends, or community events.

Underlying the argument to limit SNAP participants’ SSB purchases is the idea that SNAP participants consume more SSBs than nonparticipants, and that the SNAP benefit covers all of a household’s food spending so that any restrictions on purchases will have a direct effect on consumption in SNAP households. To investigate these assumptions, ERS researchers analyzed dietary intake data from the 2005-08 National Health and Nutrition Examination Survey (NHANES). Respondents were asked to report their food and beverage consumption on the day prior to the interview (the intake day). Focusing on adults age 20 and older in households with income at or below 250 percent of the Federal poverty line, researchers examined consumption of three categories of beverages: SSBs, alcoholic beverages, and other caloric beverages not sweetened with added sugars or corn syrups (nonflavored milk and 100-percent fruit and vegetable juices). SSBs included caloric beverages such as flavored milk, sweetened coffee drinks, sports drinks, and carbonated nondiet beverages. Water and diet (noncaloric) beverages were not included in this analysis.

The Dietary Guidelines for Americans recommend that alcoholic beverages and SSBs both be consumed in moderation by adults who choose to consume them. While alcohol and SSBs are different in terms of tax rates, controls on who can purchase them and where they can be sold, and health impacts, the differences in alcohol consumption between SNAP participants and nonparticipants may provide insight into how forbidding purchases of SSBs with SNAP benefits could affect consumption among SNAP participants. 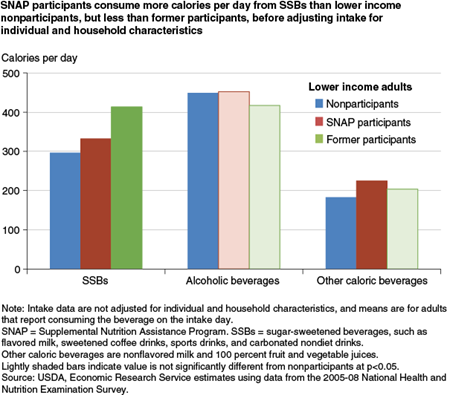 … But Not After Accounting for Differences in Individual and Household Characteristics

Simply comparing average beverage intake across different SNAP participant and nonparticipant groups does not address the question of whether SNAP influences purchases and if restrictions on SNAP purchases will have any impact on individual intakes. Differences in the characteristics among the three lower income groups may explain differences in SSB and other beverage consumption.

Among these three groups of lower income adults, the nonparticipant group was older and more likely to be male, non-Hispanic White, married, and to have at least some college education than current SNAP participants. Nonparticipant adults had a higher average body mass index (BMI) and were more likely than SNAP participants to be overweight (BMI between 25 and 29.9) but less likely to be obese (BMI of 30 or higher). Nonparticipant adults lived in smaller households with higher incomes and were less likely to have children under age 18 in the household. Many of these demographic characteristics influence food and beverage consumption.

After accounting for these observable characteristics, SNAP participants are no more likely to consume SSBs than lower income nonparticipants. These findings are consistent with other ERS research on overall diet quality, which also found that SNAP participants’ diets do not differ greatly relative to otherwise similar nonparticipants. Along these lines, researchers in this analysis found no differences in alcohol consumption between SNAP and nonparticipating adults, even though alcoholic beverages cannot be purchased with SNAP benefits.

SNAP Benefits Do Not Cover All Household Food Needs

For most SNAP participant households, SNAP benefits do not cover all of their food needs. ERS researchers also examined information collected in the 2007-08 NHANES about household food spending and SNAP benefits received (this information was not collected in 2005-06) to measure the gap between benefits and food spending. On average, SNAP households received $257 from SNAP yet spent $490 on food each month. Over 85 percent of SNAP participants spent more than their monthly SNAP benefit level on food, purchasing an average of an additional $301 worth of groceries with their own money. 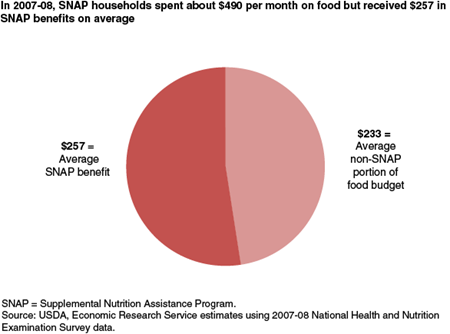 While SNAP participants could use their own resources to purchase SSBs, a restriction on SNAP purchases of SSBs would mean a slightly higher price of such beverages for participants in States that tax grocery store food purchases, since SNAP participants do not pay sales tax on SNAP purchases. Excluding SSBs from the allowable foods and beverages may mean SNAP participants who purchase them would have to pay the tax (State policies on how to tax mixed purchases—e.g., purchases using both SNAP and cash income—vary), effectively increasing the price of SSBs for SNAP participants and potentially lowering the quantity purchased. A previous ERS study estimated that a 20-percent tax-induced price increase on sweetened beverages would decrease total daily beverage intake a small amount—37 calories—for the average adult because SSBs make up a very small portion of household food budgets and consumers can substitute to nontaxed food or beverages that may contain added sugars and calories.

Encouraging Healthier Choices Is Another Approach

Previous research on the effect of taxing specific food items on purchases and intake has generally found mixed or small impacts on purchases and food intake because consumers substitute away from the taxed food to a nontaxed food with similar nutritional qualities. This behavior limits the impact of these types of taxes on diet quality.

As opposed to raising price through taxes, lowering the price of specific food items is another approach to encouraging healthy food choices. The SNAP Healthy Incentives Pilot (HIP), conducted in Hampden County, MA, between November 2011 and December 2012, sought to improve diet quality among SNAP participants by effectively lowering the price of fruits and vegetables through targeted incentives at the point of sale.

A similar program is the Wholesome Wave Double Value Coupon Program, which lowers the price of fruits and vegetables for SNAP recipients who spend their benefits at farmers’ markets. The program matches the amount of benefits spent at participating farmers’ markets, given available funds, with coupons that can be used to purchase additional fresh produce at the markets.

The Agricultural Act of 2014 gave USDA $100 million over 5 years to fund and evaluate projects designed to increase purchases of fruits and vegetables by SNAP participants through the Food Insecurity Nutrition Incentive grant program. USDA’s National Institute of Food and Agriculture is managing the grant program, and USDA’s Food and Nutrition Service is managing the independent evaluations.