Economic recovery since the Great Recession—which officially ran from December 2007 to June 2009—has been slow, particularly for the labor market. The 8.7 million jobs lost during the recession were not recovered until May 2014. Tough economic times cause consumers to adjust their spending on discretionary items, including their eating-out habits. Time use data show that visits to sit-down restaurants declined during and after the 2007-09 recession, while fast food visits were little changed.

The share of the adult population purchasing fast food at a counter-service restaurant on a given day stayed fairly constant over 2007-11 at around 13 percent. In contrast, the share of adults visiting a sit-down restaurant once or more on an average day showed a clear decline beginning in early 2007, perhaps precipitated by the financial crisis and resulting consumer uncertainty. In 2006, 20 percent of adults patronized a sit-down restaurant on an average day; in 2011, just 17 percent did. 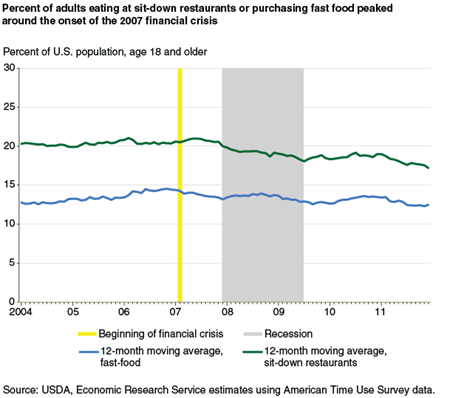 The Role of Time in Fast-Food Purchasing Behavior in the United States, by Karen Hamrick and Abigail Okrent, USDA, Economic Research Service, November 2014