How Do Households Respond to Rising Food Prices in Developing Countries?

by Sharad Tandon and Maurice Landes

Recent food price volatility and high global food prices have had significant impacts on poor and food-insecure households in developing countries. Using estimates of national food availability, ERS food security assessments found that the size of the food-insecure population increased by 11 percent in 2008 following the global food price crisis. Given that food prices have been rising over the past two decades, policymakers and researchers are interested in the ability of households to cope with rising food prices.

Similar to global patterns, food prices rose in India during the global food price crisis. ERS analyzed changes in food consumption and overall household expenditure in response to increased food prices using data from two surveys conducted by the Indian Government: the first covered approximately 125,000 households during 2004-05; the second covered approximately 100,000 households during 2009-10. To isolate the effect of rising food prices from the effects of other events (such as the rapid income growth in India during the same time), ERS researchers compared the impacts of price spikes among households with different consumption patterns. Rice prices rose much more than wheat prices, and survey results revealed greater changes in consumption and expenditures among rice-eating households than among wheat-eating households.

Researchers found little evidence of a change in overall calorie consumption among households most affected by the rising food prices. However, there were a number of adverse welfare impacts. Households exposed to the largest food price increases decreased diet quality significantly more than less exposed households and also had smaller increases in spending on medical services, clothing, and durable goods. The reduced access to medical care caused by the increases in food prices has potentially large impacts on health given that households faced increasing rates of malnourishment at the same time. 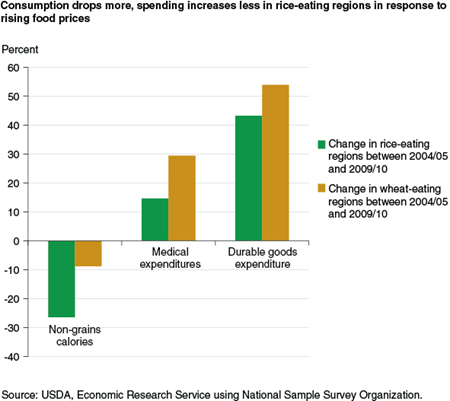