The United States accounts for 70 percent of the world’s exports of sorghum, a food and feed crop that often substitutes for corn. While sorghum is primarily grown in the United States, India, and Sub-Saharan Africa, the biggest importers of sorghum have historically been Japan and Mexico, with two-thirds of world shipments—about 3.7 million metric tons (mmt)—reaching their ports in 2012/13. But recently, the global pattern of sorghum imports has shifted with the emergence of China and its surging demand for animal feed.

In the past, China imported sorghum primarily from Myanmar to produce baijiu, a popular alcoholic beverage. Recently, however, China’s trade and transgenic barriers to corn imports have pushed its domestic corn prices artificially above the world price, forcing it to rely more heavily on sorghum from abroad as a lower cost feed substitute. China’s sorghum imports jumped from 84,000 metric tons in 2011/12 to 4.2 mmt in 2013/14, now making it the world’s top sorghum importer. In contrast, Mexico’s sorghum imports have declined in response to cheaper world corn prices, and Japan’s sorghum imports have largely remained unchanged.

China’s agricultural and trade policies in the corn sector are driving much of the growth in sorghum demand and imports. Chinese corn farmers receive high prices as a result of production subsidies and government purchases. Tariff rate quotas, the government’s ban on unapproved genetically modified (GM) corn, and slow approval process further insulate domestic producers from international market forces. As a result, livestock producers in China now not only face higher domestic feed prices but also constraints on their ability to import corn from abroad. In response, the livestock industry has shifted its feed inputs towards low-priced sorghum, sidestepping GM restrictions and a variety of import trade barriers. 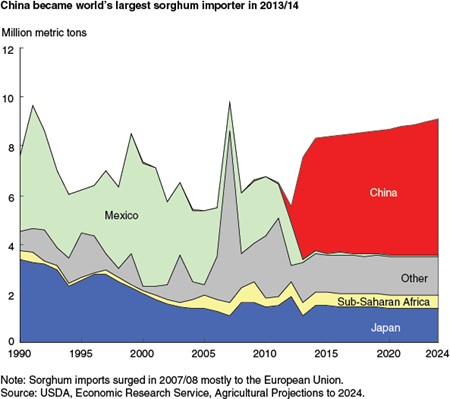