Farmers in California grow a wide variety of crops using off-farm surface water, groundwater, and to a limited extent, on-farm surface water. Differences in the source of irrigation water play a major role in how vulnerable different crops are to shortfalls in surface water supplies due to drought. In addition, farmers of different crops have differing levels of investment in irrigation technologies. Under traditional, gravity-fed irrigation technology, a significant portion of applied water is lost through evaporation, run-off, and infiltration below the root zone. Under pressure-fed, including much more expensive drip and micro irrigation systems, water losses are much lower, which allows irrigators to maintain higher yields with lower application rates.

Analysis of data from the 2013 USDA Farm and Ranch Irrigation Survey suggests that farmers in California have made many production decisions taking water supply reliability into account. Crops such as rice, cotton, and beans depend heavily on off-farm surface water, which means that the reductions in snowpack and reservoir storage due to the ongoing drought are, on average, a greater vulnerability for producers of these crops than for producers of more ground-water dependent crops. However, this measure of vulnerability does not account for variations in surface water supply reliability due to seniority of water rights or in groundwater reliability due to differences in aquifer saturated thickness. One reason that the surface water-dependent crops are more exposed to less reliable supplies may be that these crops are less capital intensive, making it easier to adjust planted acreage in response to expected water shortfalls. In contrast, the most capital-intensive crops and irrigation systems, such as almond orchards using drip irrigation systems, have been strategically located so that they rely on both groundwater and surface water. Farms that use the least amount of gravity irrigation, such as orchards, vineyards and tree nuts, vegetables, and berries, are the most able to limit evaporation losses during the drought. As such, these crops are more likely to continue irrigating at closer-to-historic levels during the drought. Over the long run, farmers in California have responded to differences in water supply reliability through both crop selection and investment in irrigation technology. 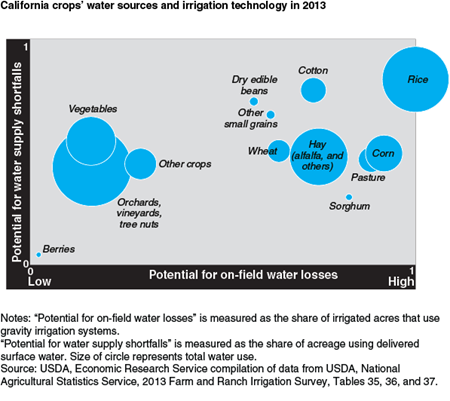