Statistics from the U.S. Centers for Disease Control and Prevention (CDC) indicate that about 17 percent of U.S. children and teens 2-19 years old were obese in 2011-12. Obese children are likely to become obese adults, putting them at risk of developing type-2 diabetes, osteoarthritis, and cardiovascular diseases.

A closer look at obesity statistics reveals that not all children are equally at risk. A higher proportion of children from low-income families are obese, compared with their peers from higher income families. (An obese child is one whose body mass index (BMI) is at or above the 95th percentile of the sex-specific CDC BMI-for-age growth chart.) ERS researchers investigated if the gap in obesity rates exists at birth or develops over time, and what factors may explain the gap. For their analysis, researchers used the U.S. Department of Education’s Early Childhood Longitudinal Study, Kindergarten Class of 1998-1999, which tracked a nationally representative sample of children attending kindergarten in 1998 until they reached eighth grade in 2006.

The ERS researchers looked at factors that could potentially explain why low-income children gain weight faster as they age, compared with their higher income counterparts. Questions posed to 5th and 8th graders about their eating habits and physical activity levels revealed that a larger percentage of low-income children consumed sweets and fast food more frequently than high-income children in the sample, and a smaller percentage of them exercised frequently. However, the researchers could not pinpoint a single factor explaining why low-income children’s net caloric intake is higher than that of high-income children. Parental characteristics (employment status or behaviors), children’s participation in school meal programs, or other child-specific characteristics only accounted for a small portion of low-income children’s faster weight gain. The inability to identify one main factor behind the widening obesity gap could be attributed to data limitations or the complex nature of the underlying mechanisms. 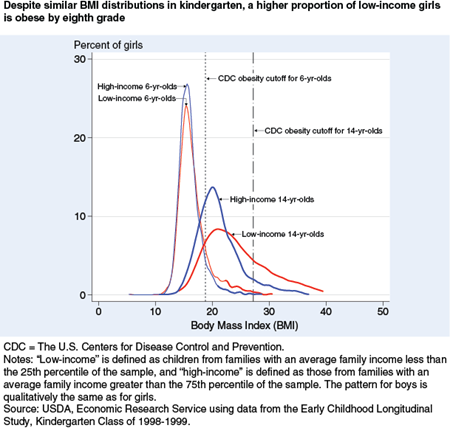