The Patient Protection and Affordable Care Act of 2010 (ACA) requires most U.S. citizens and legal residents to obtain health insurance coverage by enrolling in some form of public or private health insurance, facilitated through health exchanges either at the State or Federal level. The ACA also encourages States to expand the Medicaid program to individuals with income less than 138 percent of the Federal poverty level (FPL) who were not previously covered. The FPL varies by household size and is $24,250 for a family of four in 2015. As of January 27, 2015, 29 States and the District of Columbia have decided to expand Medicaid and 21 States have decided not to participate in Medicaid expansion. For some lower income households that are ineligible to participate in Medicaid—regardless of whether they live in a State with expanded Medicaid or not—and do not have health insurance, the Federal Government will offer a health insurance premium tax credit as an incentive for individuals to obtain insurance coverage.

Some low-income farm households without insurance that reside in non-Medicaid expansion States may fall into a “coverage gap” whereby they are neither eligible for Medicaid nor for premium tax credits. This is the case because their incomes are too high to get Medicaid under their State’s current rules and their incomes are too low to qualify for help buying coverage in the exchanges Overall, an estimated 4 million individual adults nationally fall into this gap.

Forty-five percent of farm families had a modified gross adjusted income of 400 percent or more of the FPL, making them ineligible for premium tax credits. Only 3 percent of persons residing in these households did not have insurance in 2011. Despite being ineligible for tax credits, this group of farm households who currently purchase coverage directly from an insurance vendor without the benefits of a group plan may benefit from being able to participate in the health exchanges at a lower cost.

The ACA may affect farmers in several ways. Access to health insurance has the potential to increase access to health care services, which could result in healthier farmers and their families. Health insurance also acts as a backstop against catastrophic financial losses; better access to insurance may mitigate losses due to an illness or injury. The ACA may also influence economic decisions of farm households across the Nation, notably with regard to labor allocation. The option to obtain health insurance through a health exchange may decrease the number of farmers who hold off-farm jobs in order to obtain employer-sponsored insurance, and could spur more people to begin a new farm as a full-time occupation. Another potential effect is on succession planning. Currently, uninsured farm households, particularly those with preexisting conditions, may behave differently if the ACA means their farm assets will not be at risk of liquidation due to the possibility of extreme medical expenses. 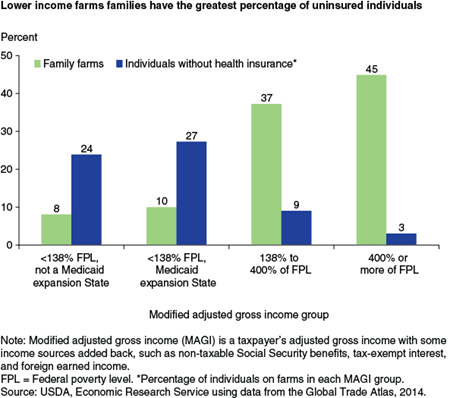