by Kevin Patrick and Ryan Kuhns

Before falling in 2014 and 2015, both income measures had trended upward since 2009. During the 20 years prior to 2009, net cash and net farm income were relatively stable, with only one period in the late 90s with consecutive years below the 10-year average. However, prior to that stable period, both measures had boomed in the mid-1970s before declining significantly, with both measures falling below their respective 10-year moving averages for the next decade through 1985. Ultimately, multiple factors will determine whether the current decline in net farm and net cash income will continue as it did during the late 1970s and early 1980s.

High cash receipts from 2010 to 2013 were led by strong domestic and foreign demand for agricultural products and weather-related production disruptions. These factors will continue to determine cash receipts in the upcoming years and will be affected by the strength of the U.S. dollar, any newly implemented trade agreements, farm policy, and weather conditions. The high prices that farmers received for feed and oil crops from 2010 to 2013 coincided with increasing feed, fertilizer, seed, and rent expenses. The degree to which future input prices respond to changing commodity prices will influence the level of expenses, net farm income, and net cash income in the years ahead. 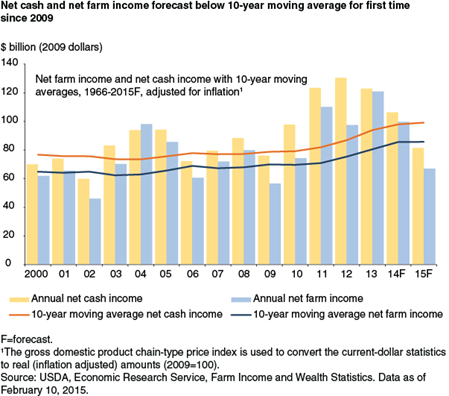