The Special Supplemental Nutrition Program for Women, Infants, and Children (WIC) is USDA’s third largest food assistance program. In fiscal 2013, an average of 8.7 million low-income women, infants, and children per month participated in the program, with expenditures totaling $6.4 billion. WIC participants are given vouchers, checks, or electronic benefit transfers (EBT) for specific packages of foods that can be redeemed at WIC-authorized retailers anywhere in the State the vouchers were issued. Stores are then reimbursed by the State in which they operate for the items sold to WIC participants at the prices charged for those WIC-approved foods. Containing program costs is a continual issue because WIC is funded annually by Congressional appropriations, making the program’s capacity largely dependent upon the funding level and costs per participant. In turn, costs per participant depend in part on the prices (redemption values) charged for the WIC foods. A recent study by ERS and University of California, Davis researchers found that smaller retailers in California charge higher prices than larger retailers for comparable WIC foods.

The researchers used redemption data for the California WIC program from 2009 through 2012 to study patterns in WIC redemptions and costs for WIC packages across stores. One of the most heavily redeemed WIC food packages was package 6012, which consists of a gallon of low-fat milk, a dozen eggs, a pound of cheese, and either peanut butter (16- or 18-ounce container) or a pound of dried beans, peas, or lentils. The median redemption value for this package in January 2011 was $20.05 among stores with one or two check-out registers. However, among large supermarkets with at least 10 registers, the median redemption value was $12.95.

Importantly, prices did not decrease steadily with increases in store size. Stores with three or four registers had significantly lower prices than did the smallest stores and prices dropped again for stores with five or six registers, but prices are comparable among all stores with at least five registers. The study included 18 of the most popular WIC food packages and all followed a similar pattern across store sizes, with results suggesting that food package costs are considerably higher in smaller stores. 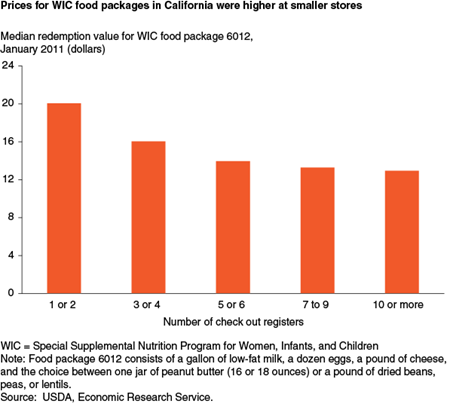