by Roger Claassen and Eric Duquette

What are taxpayers getting for their money? The answer entails, in part, knowing whether the practices supported with payments result in additional conservation efforts on the part of the payment recipients. Additionality occurs when a conservation payment causes a change in conservation practice use, agricultural input use, or land use (referred to collectively as “conservation practices”) that leads to a change in environmental quality. In practice, quantifying and measuring changes in environmental quality can be difficult. This article considers a measure of additionality in which any practices supported by payments can be considered “additional” if they would not have been adopted without the payment.

Conservation payments are not the only reason farmers adopt conservation practices. Many of the practices that can be supported by USDA programs provide onfarm benefits to farmers that offset at least part of the cost of adopting the practice. Conservation tillage, for example, can require improved planting equipment, make weed control more difficult, and may reduce crop yields, but it is also likely to reduce the cost of labor, fuel, and tillage machinery. A critical consideration is whether the onfarm benefits exceed the costs of adopting the practice. When they do, farmers have an incentive to adopt the practice without government support. 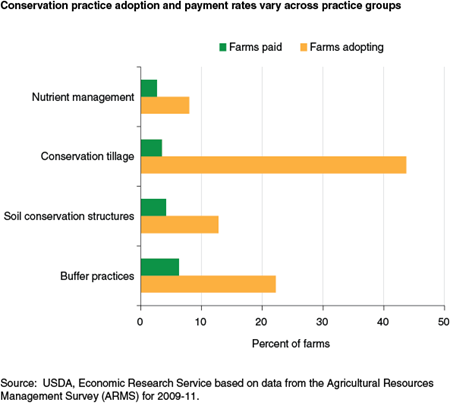 But determining which individual farmers would and would not adopt practices without payments is not straightforward. The benefits and costs of conservation practice adoption vary across farms and across time due to differences in climate, soils, topography, farmer management skills, concern about environmental quality, and other factors. Farmers who have not yet adopted a practice may change their view of its merits once it has been used successfully by others or as the technology behind the practice evolves and improves. While some of these differentiating factors can be observed, farmers who are similar in many ways may still come to very different conclusions about the benefits and costs of adopting a specific conservation practice at a given point in time. When available, farm-specific information on past practices can be a helpful, but not necessarily reliable, predictor of future practices.

Once a payment has been received and the required changes in farming practices have been made, it is no longer possible to directly observe what a farmer would have done without the payment. To estimate the behavior of farmers, ERS researchers “matched” farms that received payments (payment farms) with a group of farms that did not receive payments (nonpayment farms) but are in many other ways similar to the payment farms. While the information garnered from any single match is subject to error, comparing the behavior of many matched farms enabled researchers to estimate the differences between decisions made by payment and nonpayment farms. Farmers (and farms) that are similar are assumed to make similar decisions about production and conservation practices. Statistical matching has been used extensively to evaluate the effectiveness of many government programs.

Data on practice use and payments are from the crop-specific, field-level portion of USDA’s Agricultural Resources Management Survey (ARMS) for 2009 (wheat), 2010 (corn), and 2011 (barley and sorghum). Respondents were asked which practices were in use on the surveyed field, when they were first installed or used, whether a payment was received in conjunction with the practice, and what program the payment came from. The program choices were (1) the Environmental Quality Incentives Program (EQIP), (2) Conservation Security Program/Conservation Stewardship Program (CSP), (3) Conservation Reserve Program continuous signup (CRP), or (4) other Federal, State, and local programs. Not every program was considered for every practice group.

Practices were grouped by function. For example, terraces, grade stabilization, and water and sediment basins are grouped because they are all structural practices typically used to reduce soil rainfall erosion on slopes. Producers were classified as “adopters” if they had adopted at least one practice in the group and “payment farms” if they had received a payment in conjunction with at least one practice in the group. Because survey questions vary from year to year, the information used to estimate additionality for each practice group also varies.

Additionality Is High for Some Practices

For structural practices, an estimated 80 percent of buffer practices and 82 percent of soil conservation structures supported by payments were additional—that is, they would not have occurred without the payment. High levels of additionality are not surprising. These practices require substantial upfront investment but often provide onfarm benefits that are intangible (e.g., buffers can enhance wildlife populations for hunting or viewing) or occur only in the distant future (e.g., preservation of soil depth and long-term soil productivity). Results suggest that while some farms have installed structural practices on their own, for many farmers, the onfarm benefits associated with these practices are not high enough, relative to costs, to encourage adoption without cost sharing. While some farms will adopt these practices without payments, most farms facing the high initial cost of these practices are unlikely to adopt them without financial support.

For conservation tillage, additionality is measured as the share (or percentage) of payment farms (farms that received incentive payments at some time in the past) that would not have adopted the practice if the payment had not been received at some point. This “long run” view is taken because it is the outcome that USDA seeks to achieve with incentive payments. Note, however, that short-term practice adoption in response to incentive payments can provide additional environmental benefits, even if the practice is not continued when payments end.

Results for additionality in other nutrient management practices are inconclusive. Corn farmers receiving payments during the period applied an average of 95 pounds of nitrogen per acre. If nutrient management payments had not been received, it is estimated that these farmers would have used an average of 116 pounds per acre. While the difference (21 pounds per acre) appears to be large, it is not precisely estimated and one cannot be confident that it is different from zero in a statistical sense. Likewise, farmers who received nutrient management payments during the period applied 38 percent of nitrogen after planting to help match nutrient application timing to that of the highest crop need. While ERS estimates that, in the absence of payments, these farmers would have applied only 25 percent after planting, the statistical evidence for the difference is not strong. That is, one cannot rule out that, on average, farmers receiving nutrient management payments actually applied the same amount of nitrogen fertilizer and the same proportion after planting that they would have done without receiving an incentive payment.

Most existing benefit-cost indices, however, implicitly assume full additionality. Given the potential for nonadditionality, indices will maximize environmental gain only if they focus on additional practices. Consider a simple example which, for ease of comparison, assumes away differences in climate, soil, topography, and landscape position. Suppose that conservation tillage (CT) can reduce soil erosion by 5 tons per acre per year and total transition incentive payments are $25 per acre. Given these assumptions, a budget of $10,000 could support CT payments on 400 acres, yielding an expected total soil erosion reduction of 2,000 tons per year. If only 50 percent of the CT practices supported with payments are expected to be additional, additional soil erosion reduction would be only 1,000 tons per year.

In the real world, these comparisons would be more complex because of variation in climate, soil, topography, and landscape position among farms. Cost effectiveness of practices may differ across locations depending on these same factors. Conservation tillage, especially no-till, may also have soil quality benefits that are not captured in the simplified example. Nonetheless, additionality estimates, especially if estimated in ways that reflect local conditions, could help improve program performance.

These estimates of additionality are among the first for U.S. conservation payment programs. Note, however, that the data underlying the analysis cannot support tests for regional difference in additionality and provide information on only a small number of practices, although they are widely used practices and are often supported by conservation programs.

Findings also suggest caution in using additionality estimates in program design. To make programs more cost effective, differences in additionality across practices must be weighed carefully along with potential differences in environmental benefits and costs. In the real world, where no two fields (and no two farmers) are exactly alike, adding additionality to the list of considerations in conservation program delivery will be a difficult task.