On March 31, 2014, the Intergovernmental Panel on Climate Change (IPCC) released a comprehensive assessment of potential climate change impacts, including impacts on global crop production. The methodology used in the IPCC assessment begins with an ensemble of global climate models that simulate future temperature and precipitation in response to a range of possible greenhouse gas concentration scenarios. Output from the climate models is then used as input to crop growth models to simulate changes in crop productivity across crop types and location.

Staff at ERS and other research institutes in the U.S., Europe, and Japan have extended this modeling chain one step further by adding a group of nine global economic models that account for market adaptation to climate change. For the scenarios studied, higher global temperatures and reduced global average crop yields are expected. In response, farmers, consumers, and input suppliers are likely to alter their production and consumption patterns as prices adjust to changes in food supply and demand. Research indicates that a decrease in agricultural productivity due to climate change could be largely mitigated by increasing non-land inputs such as fertilizer and irrigation, increasing cropland area, and expanding international trade.

Economic results are summarized by comparing the world in 2050 with and without climate change in a high greenhouse gas emissions scenario. The average projected climate-change-induced decline in productivity across four major field crops is 17 percent. However, the average projected decline in global consumption of these crops is only 3 percent, with economic adaptation making up the difference.

The climate-change-induced drop in productivity leads to changes in crop yield, cropland area, and location of production, with only a small decline in world average production and consumption of major field crops. International trade reduces the large geographic variation in productivity levels to a much narrower range of changes in world crop consumption. However, maintaining crop consumption near levels that would be expected without climate change comes at a cost. All nine economic models project an increase in the inflation-adjusted price of crops, with the average price increasing 20 percent. 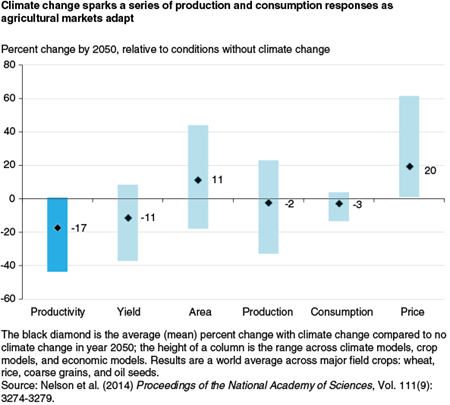