According to the 2007 Census of Agriculture, approximately 294,000 farms, or 13 percent of all U.S. farms, operated on 10 or fewer acres. Collectively, these small acreage (SA) farms operated only 0.18 percent of all U.S. farmland in 2007, but they were responsible for approximately $9 billion in farm sales, or 3 percent of the U.S. total. Given the strong and growing empirical evidence that larger U.S. farms are more efficient at producing most farm products, how do small acreage farms compete?

One answer may be that most small acreage farms in the U.S. do not attempt to compete with larger farms for market share. Most SA farms produced very few, if any, farm products for sale in 2007. However, approximately 50,000 SA farms, or more than 1 in 6, reported gross sales of at least $10,000. Of these, approximately 3,600 SA farms reported sales of $500,000 or more in 2007. While accounting for fewer than 2 percent of SA farms, these higher sales farms were responsible for two-thirds of SA farm sales. While far from the norm, operating a sizeable farm business, even by U.S. standards, is possible on very few acres.

The majority of small acreage farms with sales greater than $10,000 had positive net farm income. However, net farm income does not reflect economic profitability since it ignores the implicit cost of the unpaid labor provided by the farm operator’s household. Estimated rates of return on farm equity, which account for the value of unpaid labor, are a more accurate economic measure of farm business profitability. On average, SA farms with sales of less than $100,000 had negative rates of return—after covering cash expenses, they did not earn enough to pay the operator and his or her family a market wage for the labor expended on the farm. Farms with sales of $100,000 and over had positive median rates of return, meaning that a majority of these farms were operating as profitable businesses.

Small acreage farms with sales of $100,000 or more tend to specialize in raising livestock or produce specialty or high-value crops. They produced very few or no field crops for sale. Three of the top five specializations (hog/pigs, broilers/chicken meat, and poultry hatchers) for these higher sales SA farms are in livestock production. SA livestock operations typically produce products under contract with larger companies. In these cases, the farmer specializes in raising confined animals which don’t require extensive land holdings. Floriculture production and nursery/trees rounded out the top five specializations. Flowers, herbs, and other high-value products such as mushrooms can be intensively produced on small parcels. 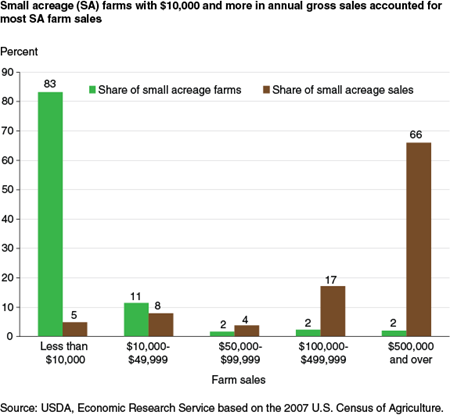