by Christian A. Gregory and Alisha Coleman-Jensen

The Supplemental Nutrition Assistance Program (SNAP) is the cornerstone of USDA’s nutrition assistance programs, providing low-income households with resources to purchase food and lessen the incidence and severity of food insecurity. Food-insecure households are those that at times lack adequate food for active, healthy lifestyles. Research conducted by ERS has shown that SNAP helps reduce food insecurity among participating households.

The amount of SNAP benefits an eligible household receives is based on income, household size, and allowable adjustments to income. SNAP benefits are adjusted annually to account for food price inflation, using national average prices for foods in USDA’s Thrifty Food Plan, a national standard for a nutritious, minimal-cost diet. For a given type of household, SNAP benefits are the same across the 48 contiguous States; however, there is considerable food price variation between geographic regions in the United States. For example, between 2002 and 2006, food prices were 8-10 percent higher in the Northeast than the Midwest; in real terms, people in the Northeast got less in SNAP benefits than those in the Midwest.

Researchers at ERS set out to find out whether variation in prices across the country makes a difference in the likelihood of food insecurity for SNAP households. To do this, they used the Quarterly Food-At-Home Price Database, a food price database designed and compiled by other ERS researchers. This database was used to price a basket of foods based on USDA’s Thrifty Food Plan for 35 metropolitan and non-metropolitan market areas across the United States over the period 2002 to 2006. These data on food prices were then matched to household data on SNAP participation and food security status available in the Current Population Survey, USDA’s source for annual food security statistics.

After controlling for other factors known to be related to food security status, such as income, employment, and demographic characteristics, as well as State-level characteristics such as unemployment and housing prices, they found that higher food prices are associated with a higher prevalence of food insecurity. Specifically, a $10 higher cost of the food basket for two adults and two children per week meant a 2.7-percentage point higher prevalence of food insecurity. SNAP households in the eight U.S. market areas with the highest priced food baskets in each year have a predicted probability of food insecurity of 57 percent, versus a 52-percent probability for average-priced areas and a 48-percent probability for the eight lowest priced areas. Higher area food prices appear to reduce the effectiveness of SNAP in alleviating food insecurity because SNAP benefits do not stretch as far as in lower food cost areas. 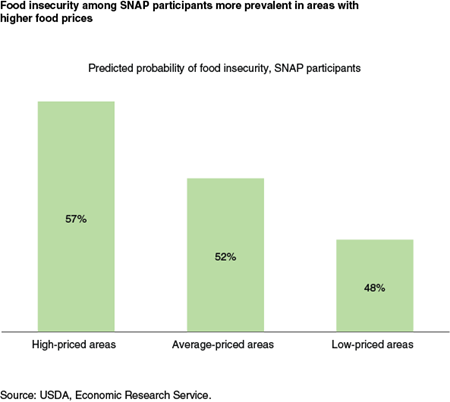