USDA’s initial forecast for 2014 net farm income is $95.8 billion, which is $34.7 billion lower than current expectations for 2013, but $8 billion higher than the average of the previous 10 years. Lower crop cash receipts, and to a lesser degree, a change in the value of crop inventories along with reduced government farm payments, drive the expected drop in net farm income. Crop receipts are expected to decrease more than 12 percent in 2014, led by an expected $11-billion decline in corn receipts and a $6-billion decline in soybean receipts. Wheat receipts are forecast down over 25 percent, reflecting a large world crop and significant declines in competing feed grain prices. Cash receipts for vegetables/melons and fruits/nuts are also expected to decline in 2014. Livestock receipts and the value of livestock inventory change are expected to increase a combined $3.5 billion in 2014, largely due to higher dairy receipts and the potential for expansion of the beef cattle herd for the first time since 2007. Elimination of direct payments under the Agricultural Act of 2014 and uncertainty about program enrollment during 2014 result in a projected $5.1 billion decline in government payments. Further, some payments authorized by the Agricultural Act are triggered by low commodity prices or revenues, and even if the payments are triggered they would not be paid out until 2015 or later. Total production expenses are forecast to decline $3.9 billion in 2014, which would be only the second decline in the last 10 years. The biggest drop in expenses comes from a forecast $6.6 billion decline in feed costs, driven by lower feed grain prices. This is partially offset by higher forecast costs for labor and livestock/poultry purchases.

The rate of growth in farm assets, debt, and equity is forecast to decrease in 2014 compared to recent years, the result of expected lower net income, higher borrowing costs, and moderation in the growth of farmland values. As a result, the value of farm assets is expected to rise 2.4 percent in 2014, while farm sector debt is expected to increase 2.3 percent. This represents a noticeable reduction in the average annual growth in each of these measures compared with the last 10 years. Nonetheless, the historically low levels of debt relative to assets and equity reaffirm the sector’s strong financial position. 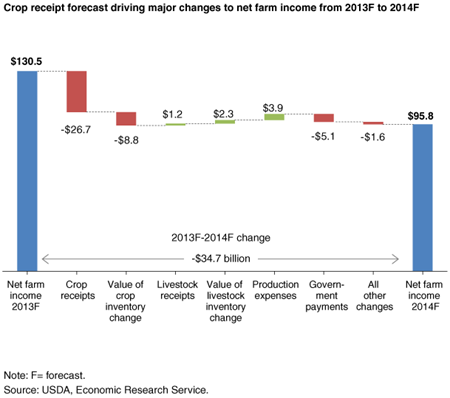