by Victor Oliveira and Elizabeth Frazão

USDA’s Special Supplemental Nutrition Program for Women, Infants, and Children (WIC) provides eligible low-income women, infants, and children with a package of supplemental foods, nutrition education, and referrals for health care and other social services. Fiscal year 2013 expenditures for WIC totaled $6.4 billion, making it USDA’s third-largest food and nutrition assistance program. WIC served 8.7 million individuals, including 2 million infants, accounting for over half of all infants in the United States. WIC is funded annually by Congressional appropriations. As a result, the number of people who can be served within a fixed budget depends heavily on the program’s food package costs—including the cost of infant formula.

To reduce costs, Federal law requires that WIC State agencies enter into cost-containment contracts with infant formula manufacturers. Typically, a manufacturer gives the State agency a rebate for each can of formula purchased through the program, in exchange for the exclusive right to have its formula provided to WIC participants in the State. Contracts are awarded to the manufacturer offering the lowest net price (the manufacturer’s wholesale price minus the rebate).

Large rebates in recent years have resulted in low net prices for WIC State agencies, typically less than 15 percent of the wholesale price of infant formula. Although still low, a previous ERS study found that real (inflation-adjusted) net prices for formula under contracts in effect in December 2008 were higher than under previous contracts. The report cautioned that rising real net prices could constrain WIC’s ability to serve all eligible applicants.

The decrease in net prices occurred during a period of fewer births, higher breastfeeding rates, and changes in WIC regulations that reduced the average amount of formula provided in the WIC food packages. Due to a shrinking market for their product, formula manufacturers may have chosen to compete more aggressively for WIC contracts to maintain their sales volume by offering lower net prices. 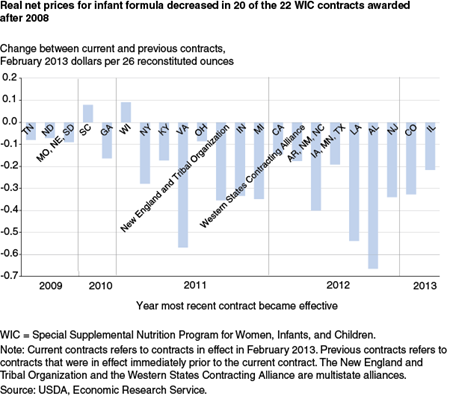